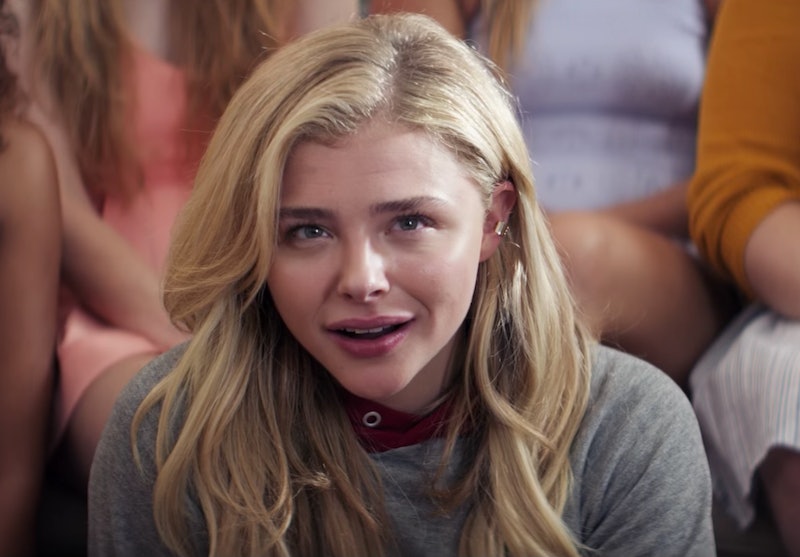 Neighbors 2: Sorority Rising is about more than just "parenthood vs. sisterhood," as the tagline says. The movie, which finds young parents Mac (Seth Rogen) and Kelly (Rose Byrne) going to war with the new sorority next door, led by Shelby (Chloë Grace Moretz), actually has a very feminist bone to pick with the traditions of college Greek life — namely, with the limitations on girls who just want to party. When Shelby starts rushing a sorority, she learns that sororities aren't allowed to throw parties in their houses, something fraternities do on the regular. In rebellion, she decides to start her own sorority that can throw parties in their own house, and it just so happens that this house is next door to Mac and Kelly. Now, this might sound like a convoluted plot device, but it's actually true. Sororities can't throw parties in their own houses, just like Neighbors 2 suggests.

Traditionally, sororities under the National Panhellenic Conference don't allow their chapters (aka houses/divisions at various colleges) to throw parties in their official sorority houses. Of course, as college campuses, demographics and social attitudes have changed, some new sororities or other sorority-like organizations might not abide by this rule. However, the 26 main sororities in the US that fall under the Panhellenic Conference are forbidden from having alcohol on the premises by the organization.

If you've been around a college campus, then you know that this rule had one very specific consequence: sorority houses generally appear cleaner than frats. It's a rule of life, no doubt facilitated by the fact that sororities don't have to clean up spilled beer every night. It does, however, mean that in some cases, sororities can be completely dependent on fraternities to host social events, which can lead to sororities competing for a relationship with a fraternity. But social power structures aside, the fact that frats can throw parties in their houses but sororities can't, could arguably be increasing the risk for sexual assault.

In January of 2015, The New York Times published an article by Alan Schwarz that questioned whether allowing sororities to throw their own parties would curtail the growing numbers of sexual assault seen on campus, specifically at frat parties. As the article states, a 2007 study by the Department of Justice discovered that women who went to fraternity parties often were more likely than others to get sexually assaulted. By throwing their own parties, sororities could perhaps have more control over what goes on in their houses, as those who throw the parties determine everything from the dress code (if a party is themed, as Greek parties are known to do) to what's in the punch bowl (as Neighbors 2 shows, there's a reason women are cautioned not to accept a drink they didn't see being poured).

Sororities and fraternities are all about tradition, so if you're hoping Neighbors 2 is going to take on the archaic rule that says sororities can't serve alcohol, maybe don't hold your breath — but as the movie makes clear, perhaps that change is for the best.