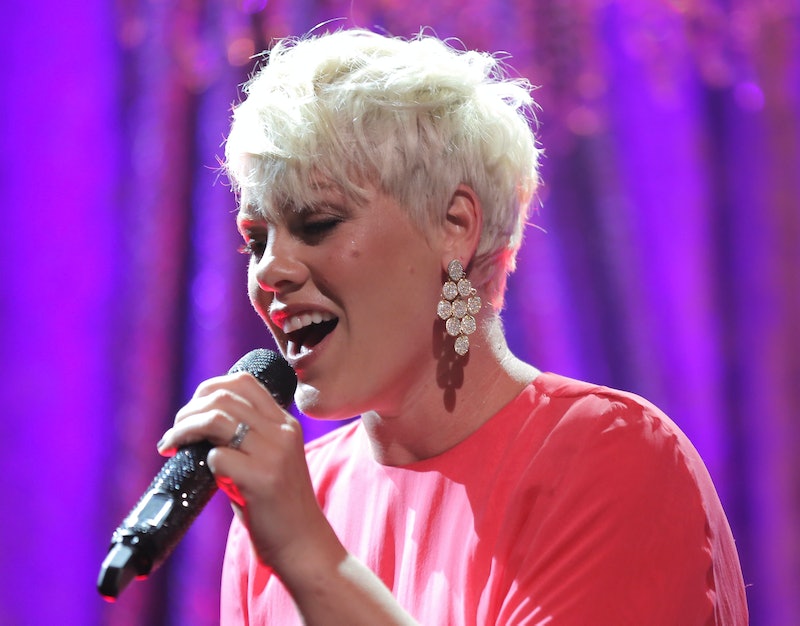 It's always exciting when Pink releases a new song, because it's guaranteed to be a total anthem we'll all want to sing along to. The singer's latest track, "Just Like Fire," is featured on the soundtrack of Disney's Alice Through The Looking Glass, and is every bit as uplifting as you'd expect. So what is "Just Like Fire" by Pink about? Pink has definitely delivered an inspiring message with her new song, and a lot of this is thanks to the help of her four year old daughter, Willow.

According to People, Pink watched an early screening of the film with her daughter, and used it as inspiration for the track. Pink said, "What's awesome about Alice is the whole theme... She's the captain of her own ship, but it takes her femaleness to be that fierce." It's no surprise that Pink was chosen to create a new song for the movie, as the singer embodies all of the same strong qualities as Alice, and then some.

As is often the case with Pink songs, "Just Like Fire" is about embracing your own individuality, and not letting other people hold you back. The song has such a strong and empowering message. So what exactly are the lyrics about?

There are so many references to Alice Through The Looking Glass in the first verse of Pink's "Just Like Fire." From the image of "running out of time" to being "surrounded by clowns," the songs draws direct inspiration from its source material. It feels as though the speaker is on a precarious journey, but that they have a quest and they want to finish it.

The chorus of "Just Like Fire" is also very fitting for the movie's soundtrack. The description of the "colorful charade" feels like something drawn straight out of Alice In Wonderland, and the "madness" that's mentioned hints at the Mad Hatter. Magic and flying also play a part, as does the sense of holding on to individuality at all costs. Pink's latest song has a really inspiring chorus that we should all live by.

And people like to laugh at you cause they are all the sameSee I would rather we just go our different ways than play the gameAnd no matter the weather, we can do it betterYou and me together forever and everWe don't have to worry about a thing about a thing

Much like the first, the second verse of "Just Like Fire" strives for greatness and individuality. Although other people can be judgmental, mocking, and bullies, it's important to remember who you are and do things in your own way. The song is about standing tall in the face of adversity, and joining forces with likeminded people.

So I can get it runningJust 'cause nobody's done itY'all don't think I can run itBut look, I've been here, I've done itImpossible? PleaseWatch, I do it with easeYou just gotta believeCome on, come on with meOh, what you gonna do?(What, what!?)

My absolute favorite line in the song is when Pink sings, "Impossible? Please!" as this is such an inspiring message. Often in life we're told that our dreams are impossible. Pink balks at that, singing "just 'cause nobody's done it" before, doesn't mean that it can't be done. I love how fierce that message is. Pink's "Just Like Fire" is an empowering anthem, that'll make you believe you can accomplish everything you hope to.