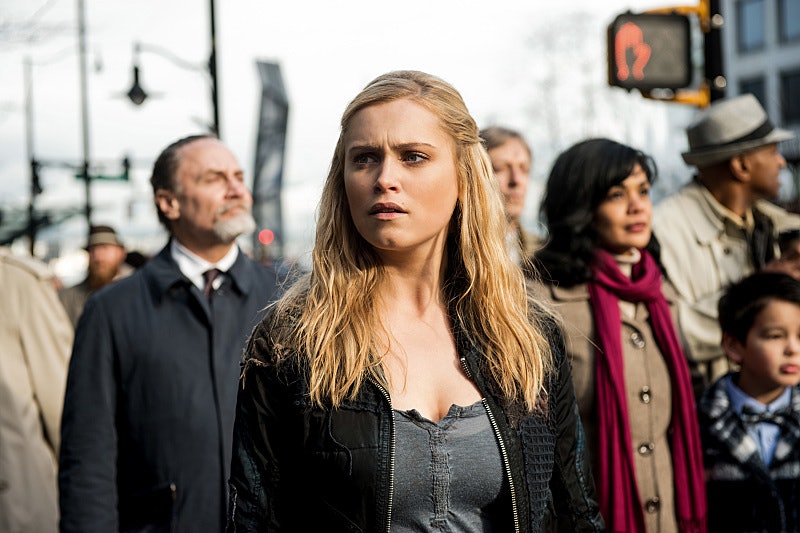 This Thursday, the third season of the post-apocalyptic CW drama The 100 will come to its conclusion. And if it's like either of the series' previous two season finales, death, betrayal, and cliffhangers should be expected. The Grounders and Ark survivors who still have custody of their own will have been in a battle with A.L.I.E., the encroaching artificial intelligence that caused the catastrophe on Earth and in a new version, still seeks to "better" humanity by bending it to her will. Can humans who have experienced this much loss defeat the A.I. when her biggest selling point is the elimination of pain? More importantly, when will The 100 Season 3 be on Netflix so you can experience the invasion all over again?

The CW has not announced a date for The 100's Netflix update. Season 2 hit the streaming service on Oct. 31 last year, giving fans over two months to catch up before Season 3's January broadcast premiere. But the network has also yet to confirm the exact start date for Season 4, though it did announce at its Upfront presentation that The 100 Season 4 will debut at midseason. Without a specific premiere date, it's impossible to pinpoint the Season 3 Netflix debut just yet, but since Season 4 will start at midseason, it's very likely that you'll be able to catch up in the late fall again.

But be warned, if you decide to marathon The 100 when Season 3 is available to stream, you may be left with a bleak outlook. The 100 is brimming with peril and tragedy. Yet I still can't stop wanting these characters have nice things. So in honor of the end of Season 3, these are the present-day experiences I'd treat The 100 characters to if I could.

The Griffin women have never had it easy. Their relationship has been strained since Clarke found out that her mother is the reason her father was floated; things didn't get much better when the adults arrived on the ground and tried to take control back from their kids. But there's still so much love between them, which is why it's been so hard to watch Abby manipulate Clarke while under the control of A.L.I.E. Once Abby and the rest of A.L.I.E.'s hosts are free, I need her and Clarke to take a day for bonding and relaxation purposes.

It's so easy for me to picture these three in a civilized 2016. They're sitting in a dorm room, laughing, and playing the new Uncharted. They do it for hours, only stopping to order pizza and then devour it. They fall asleep in a pile, and then go to the commons for brunch the next morning. The biggest problem they have to deal with is finals week. My heart hurts.

A Crossfit Membership For Octavia

I firmly believe that Octavia would be a woman to reckon with in any era. I'd love to give her the opportunity to test her body just for the fun of it and not because she has to in order to survive. The best thing about sending Octavia to Crossfit is that she would invite you out for drinks afterwards and introduce you to all of her gym-mates.

Fantasies aside, Season 4 of The 100 is probably going to be even rougher than the last, so watching Season 3 when it premieres on Netflix may be the best way to ease back into this apocalyptic world.