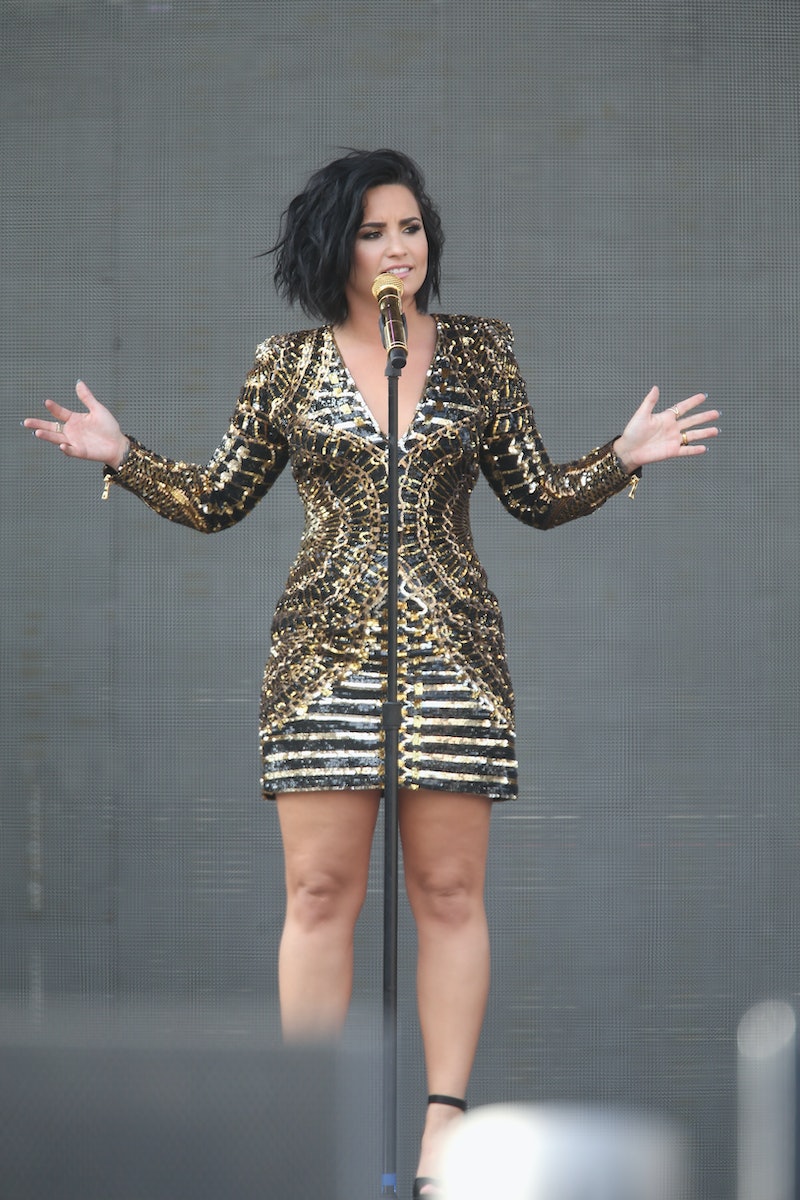 In a new interview with Refinery 29, Demi Lovato talked about Taylor Swift and their indirect, one sided "Twitter feud." You know, the one that happened after Lovato seemingly voiced her ire over Swift donating money to Kesha in her time of need, rather than talking about what was going on with her fellow singer.

In February, Swift donated $250,000 to Kesha to help with her financial needs during her ongoing court battle with Dr. Luke (real name: Lukasz Gottwald). And Lovato wrote at the time, seemingly in a dig at Swift, "Take something to Capitol Hill or actually speak out about something and then I’ll be impressed."

I'll admit, at the time, I was quite surprised by Lovato's saltiness, especially because I felt the opposite way that she did. Perhaps Swift showed her support in a way that Lovato may have not preferred, but that didn't make it any less a show of support; it just made it different.

In February, Lovato first commented on her words on Twitter, by posting a lengthy caption on Instagram that read in part:

As most people know, I tend to get fired up about the things I believe in, and although my heart and intentions are always in the right place, unfortunately sometimes my passion gets the best of me and causes me to say things that I probably shouldn't say. And when doing so it takes away from the real reason I am speaking up in the first place...

The singer went on to explain the "real reason" she was speaking up on the Kesha issue, writing that her focus was on women uniting in support of those who claim they are abused so that they can report their situations without fear. She even seemed to touch on the Swift factor once more, stating, "Everyone has their own way of giving support to others, and at the end of the day, helping victims is all that matters."

In her Refinery 29 interview, the singer spoke out about her tweets once more, but kind of went back on her word. Though, to give credit where it's due, she starts off by first owning up to her rashness, telling Refinery 29, "I got too passionate. I get carried away on Twitter, and that’s what I said, and that’s that."

As a fan of both Swift and Lovato, I can respect the doubling down of admission on her fervor. It's hard to admit you were wrong or that you got carried away. But instead of leaving it at that, in reference to the publication's question about the misdirection of attention to the "spatting female stars," Lovato said,

Listen, there’s nothing positive that comes from pitting women against each other. There are women that I don’t get along with, and that’s fine. My thing is, don’t brand yourself a feminist if you don’t do the work. I have an immense amount of respect for women like Lena Dunham... or Beyoncé, who make amazing political statements through their work.

To me, this makes Lovato's initial statement that much more encompassing. She's comparing apples with oranges here and using it as a platform to, again, seemingly dig at Swift. Not everyone is going to be a political revolutionary. And not everyone is Lena Dunham or Queen Bey. People do things in their own way, in their own time, and they should be given that courtesy. You can't dictate someone else's life or mission.

Whether Swift is deemed fit to be a feminist is not Lovato's call to make, especially when you consider this comment she also made to Refinery 29,

I’m not going to stop saying what I believe in. I have no problem standing up for myself. Maybe I got it from growing up in Texas, but I never took sh*t from anybody. Now I know how to do it without pushing people away. You just don’t approach things with a F*ck You mentality. Instead it’s: This is the way I’m perceiving things. There’s nothing wrong with my beliefs or feelings. So let’s agree to disagree, or let’s just disagree.

But Lovato did seemingly push Swift away. Sure, there's nothing wrong with her beliefs or feelings, but she's saying in a roundabout way that there is something wrong with Swift's. And, in the end, shouldn't the 1989 singer then be granted that same luxury she allows herself?