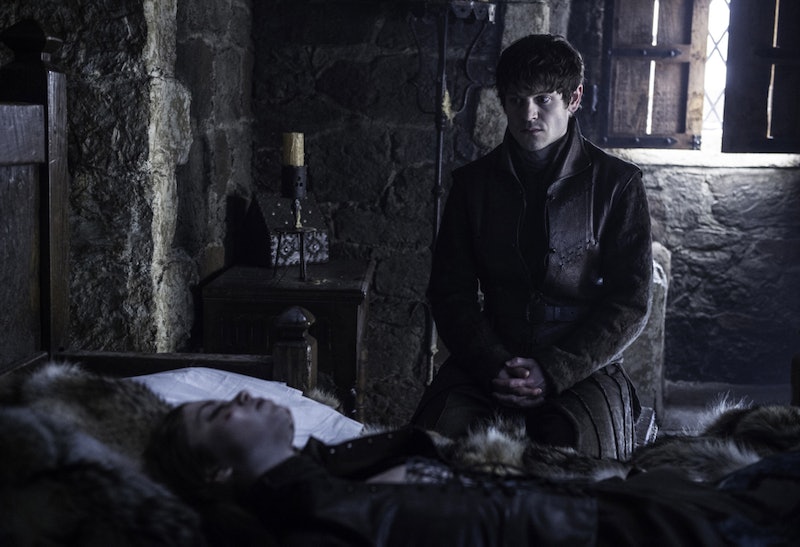 There are a lot of baddies/crazies in Westeros and the lands beyond. Everyone's murdering somebody else for the Iron Throne or sleeping with the love of someone else's life or slaughtering direwolves. But the worst of them all is Ramsay Bolton. While some of these nut jobs do their evil deeds because they believe it is their whatever-god-they-believe-in-given-right, or for self preservation, Ramsay takes pleasure in every creepy and horrible action. We may be upset with the actions of some Game of Thrones characters, but Ramsay Bolton we want to kill ourselves. There were so many times when we wanted Ramsay to die on Game of Thrones, when we wanted to reach into the television/laptop/iPad, pull him out by his tiny televised head, and then smash it.

No offense to Iwan Rheon, who seems delightful. But Ramsay's only potential redeeming quality is how much he takes care of his hunting dogs. Then again, that's only so he can use them to eat humans that get in his way, so even this seems irredeemable. Seriously, how does one ruin loving dogs? Ramsay is seriously a monster. There's nothing Bolton can do to shock us anymore. We've seen all his violence, and, to be honest, it's getting a little old. The following are the times we got really tired of Ramsay and just wanted to end his insanity ourselves. Or at least I did.

1. When He Ate That Sausage

All right, dude, we get it. You cut off Theon's penis. You don't have to rub it in.

No one is buying that smile, you monster.

3. When He Battled Yara

And we all realized he had wounded Theon/Reek so much mentally and emotionally that Theon/Reek didn't even want to escape.

4. When He Sent That Damn Letter To Jon Snow

"Winterfell is mine, bastard. Come and see. Your brother Rickon is in my dungeon. His direwolf's skin is on my floor. Come and see. want my bride back. Send her to me, bastard, and I will not trouble you or your wildling lovers. Keep her from me and I will ride north and slaughter every wildling man, woman, and babe living under your protection. You will watch as I skin them living."

The Starks are about to roll up to Winterfell and stab him right in his also-bastard gut.

5. When He Pretended He Was Theon's Friend

Ramsay helped the poor boy escape only so he could chase after Theon and then torture him. I had such hopes for Theon, even though I was still angry with him about Winterfell. Ramsay just walked all over them.

6. When He Killed His Own Brother

Honestly, it didn't bother me that much when he killed his father. His father screwed over the Starks and thus deserved something horrible to happen to him. But why did he have to kill the baby? Couldn't he have just killed the mother and raised his brother to be his evil little protege? (How twisted is my logic that I think this is a better alternative?)

7. When He Gave Theon A Nickname

Pretty much every action Ramsay takes with Theon makes me want to bash his face in, but completely discounting Theon as a person and giving him a dehumanizing persona is so sad.

8. When He Went Against Stannis

9. When He Used His Dogs

To hunt people. Dogs are for licking their owners' toes and keeping their beds warm, Ramsay. Not chasing down young girls for fun. How many times do I have to tell you that?

10. When He Raped Sansa On Their Wedding Night

11. When Sansa Sassed Him

Remember when Sansa was all like, "oh, wait, so, if your father has a son, doesn't that make him the rightful heir," and we were all so proud of her for standing up for herself in the subtlest of ways? But then Ramsay had to ruin it by telling her he would cement his reign by getting her, the (alleged) last remaining Stark, pregnant? Sansa has one small victory and then Ramsay stomps it by threatening her with violence, rape, and an unwanted child. I wanted her to push him off the ledge so badly.

12. When He Made Theon/Reek Shave Him

Theon/Reek is a broken man. But does Ramsay really need to keep reminding us all of that?

13. When He Received Rickon Stark As A Gift

Sure, this wasn't Ramsay's fault per se, but the look of glee on his face when he saw Rickon was terrifying. Hey, Ramsay, you know what would be totally unexpected and crazy for you to do? If you were just really nice to Rickon? Maybe got him a new puppy?

We all knew it was going to happen as soon as we saw him flaying that apple, but that doesn't keep me from wanting to choke him with that stupid apple.

Though we all want Ramsay to die, I think everyone is clear on who the killer of this horrible monster should be. If Sansa Stark doesn't get to be the one who takes down Ramsay, I will finally come to terms with the fact that there is no justice in Game of Thrones.