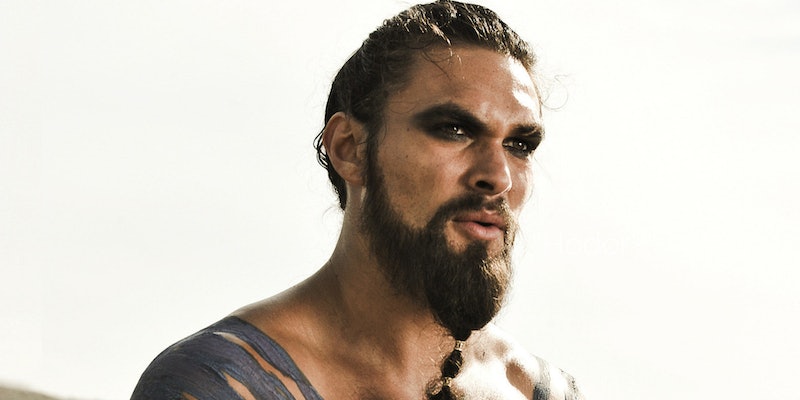 There is a bit of a theory going around (at least, I have a theory, now) based on some photos on Instagram shared by the hunky actor who played Khal Drogo, Jason Momoa. This theory? His captions really have me wondering if Khal Drogo could come back to Game of Thrones . I mean, I know his character is dead, but hear me out.

The Khal, who hasn't been officially alive on the show since his untimely demise-by-scratch in Season 1 Episode 10, was last seen smothered and then strapped to a pyre. There was a bit of a vision quest situation in Season 2 at the House of the Undying where Dany got to be tortured by seeing Drogo and her unborn baby, but it wasn't a real Drogo-sighting — just a vision. But, I'm wondering now if we're going to see him aain, because Momoa keeps sharing photos on Instagram — in what may be the cutest support of television spouse ever — and the captions are getting more and more curious by the minute.

It all started with a few seemingly innocent enough screenshots of the Season 6 premiere, in honor of Khaleesi. At first, it looked like Momoa was just being a thoughtful supporter of his former on-screen wifey, Emilia Clarke.

Then, the caption. Wait, what? "See u soon"? He means, like, their actor selves at a fancy LA party, right?

Wait, so he's going to see not just Emilia Clarke, but also the head writers, David Benioff and Dan Weiss? And in Ireland of all places? And what is the "ALOHA DROGO" thing? "Aloha," of course, could be taken to mean both hello and goodbye. Sure, it could be an inside joke, but what if its more than that?

The latest image he shared May 16 is pointing more and more towards "this means something." After Episode 4, "Book of the Stranger," when Dany goes straight up demi-god, Momoa shared another encouraging screenshot.

"ALOHA DROGO" again? What could this be but a sneaky hint that Drogo is returning? We were all busy getting all worked about any leaked Jon Snow resurrection info and completely didn't even imagine that someone like Drogo could come back. That is a great prank.

There are a few other items that point to this conclusion:

The writers of Game of Thrones have a tendency to throw in casual statements or throwbacks that don't seem important at the time but are actually straight-up foreshadowing. When these boys were heading to Vaes Dothrak and discussing "riding the dragon," Jorah warned Daario that Danaerys would tire of him. What better time to tire of someone than when your hot husband shows up all resurrected?

The House of The Undying sure was weird, huh! Remember how real it felt? And how Dream-Drogo also hoped it wasn't a vision? That has to all mean something, right? Maybe it wasn't a vision for him either, it was just some weird magic stuff. Maybe his and Baby Rhaego's souls have just been hanging out in the Dothraki Sea waiting for Mama to show up! Then there's that's whole Undying prophecy in A Clash Of Kings which simply has to mean something:

Something's going down this season.

3. What If Drogo's Soul Is In Her Dragon?

Maybe Drogo by way of Jason Momoa won't show up in Season 6. After all, a popular theory in GoT fandom is that Drogo's been with Dany all along. The idea is that when the witch Mirri Mazzi did her thing and messed with all those life and death cycles, she zapped Drogo, Rhaego, and some random who died that night into the three dragon eggs. Then, all they needed was a little fire to hatch. Maybe this will get revealed in the season and Jason Momoa will point at us, laugh, and say "I told you so. That's what ALOHA DROGO means!"

Maybe I'm just getting too excited and jumping to conclusions, but from these hints, it really seems like a little bit of magic is about to go off in the Dothraki Sea. As long as it aids in complete world denomination of all Danaerys Stormborn sees, I'm down. Bring it on, Game of Thrones!