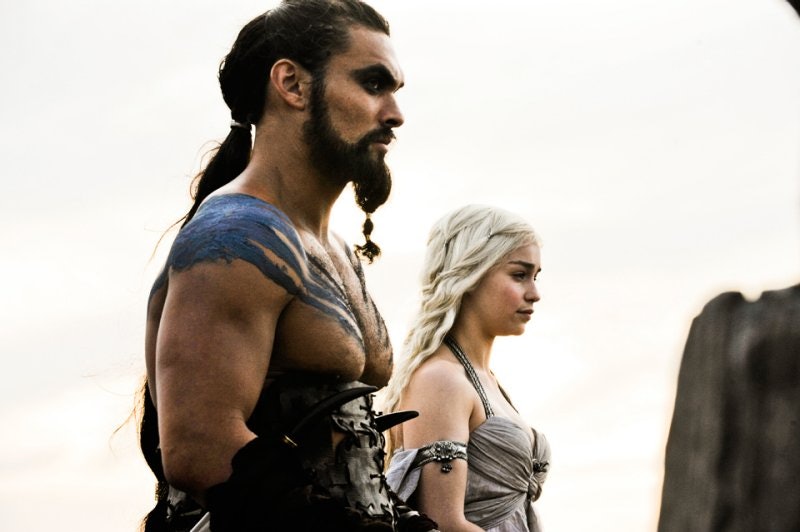 Jon Snow may not be the only beloved character potentially coming back from the dead on Game of Thrones. While praising his onscreen wife Daenerys' badassery in the Season 6 premiere, Jason Momoa hinted at a Khal Drogo return. Yes, Khal Drogo — who was cremated in Season 1, making it tricky to bring the character back. With that in mind, don't get your hopes up too high for an alive Khal Drogo to return, but it certainly sounds like a guest appearance might be coming up in Season 6 or possibly Season 7.

Momoa has been a busy man since his stint on Game of Thrones ended. He starred in the SundanceTV series The Red Road, nabbed the role of Aquaman, and now has a new show, Frontier, set to premiere soon. Add in three movies in post-production, and it becomes clear that Momoa is very in demand. Still, he clearly loves Game of Thrones as much now as he did when he was a part of the series.

After the Season 6 premiere, Momoa took to Instagram to honor his Khaleesi for not taking crap off the Khal who kidnapped her. It is beyond adorable to know Momoa still feels so connected to Dany and Emilia Clarke after all these years. Khal Drogo and Dany forever!

This is the point where things move from sweet to curious. Notice the caption on Momoa's first photo. He not only says he misses his former castmates, but that he will see them soon. Now, it is entirely possible Momoa is dropping by the set for a visit while he is filming another project. If you are as passionate about a project as Momoa was about Game of Thrones, then of course you would take every opportunity to visit your old pals.

I would be perfectly happy with that explanation, but then this happened:

Momoa tells Game of Thrones head writers David Benioff and Dan Weiss that he will see them in Ireland, and "Aloha Drogo." Aloha means goodbye, but it also means hello. WHAT DOES IT MEAN?!

If Momoa does return, this will be his second return to the series since his character's death. Dany saw Drogo and her unborn son during her vision quest through the House of the Undying in Season 2, and it was majorly heartbreaking. Now Dany is once again back among the Dothraki and about to be sent to Vaes Dothrak to live with the wives of other fallen Khals.

Little is known about Vaes Dothrak, but with Dany being forced to go back to the beginning of her journey, now would be the perfect time for a little guidance from Khal Drogo. Whether Dany's beloved Drogo appears in a dream, a vision, or a memory, it appears Dany has to gain perspective before she can move forward on her journey back to Westeros. I think it is fair to say Dany has lost her way a bit in recent seasons, and by going back to the world of the Dothraki where she first gained confidence in herself as a leader she will find a way to move forward with her plans to take the Iron Throne.

If Drogo is the one who helps Dany back on the right path then all the better. Her husband may be dead, but Momoa has proven he and Drogo are still Dany's number one supporters.