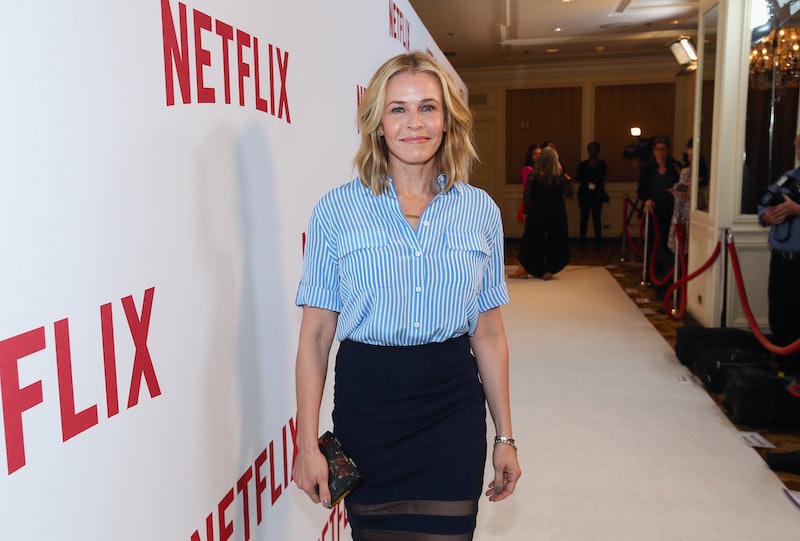 Not every woman wants to get married and have kids, but for some reason society still has no shortage of antiquated hangups about this lifestyle choice. That's why I'm so glad that Chelsea Handler talks about her decision to not have children and is completely open and unapologetic about it. In her typical blunt style, Handler kicked off the May 18 episode of Chelsea by stating to her audience: "Thank God I don't have a baby... Why do people have babies? Start answering!" To be clear, I don't think she's speaking this way to belittle individuals who do choose to become parents — rather, she's illustrating the tone many people adopt when they question women about the decision to remain childless.

It would be an understatement to say that Handler's career keeps her busy, so she naturally addressed the infuriating double standard faced by professionals with children:

I was doing a photo shoot with a man and he told me he has five TV shows on the air, and then he also told me that he has five children. And I went, "how do you do that? How do you take..." And then I thought, "Oh no, you don't. Your wife takes care of that."

It's been said before, but it's worth reiterating — women with children and successful careers are constantly questioned about how they "do it all" and even shamed for not spending enough time with their kids because they care about their jobs, too. There are countless amazing parents out there who are also rockstars at their jobs, but the notion that a woman's life is incomplete without a child needs to be put to rest once and for all. Plus, Chelsea has Chunk — what more could she possibly need? And, most importantly, she doesn't want children. So, people need to stop making her feel bad about it.

Later, Handler's friend Gwen Stefani stopped by for an interview. Stefani is preparing for her first tour in eight years and her three young children will be on the road with her. Unlike Handler, she's extremely happy as a mom and the exhaustion that comes with the territory is well worth it to her. Seeing these two accomplished women discuss their choices was a breath of fresh air and an important reminder that our happiness isn't dependent on our decision of whether or not to have kids — it's dependent on doing what's best for us and not basing our choices on what society "expects" us to do.

Stefani went on to describe Handler as a "beautiful person." The comedian brings joy to her fans, but she also clearly enriches the lives of everyone close to her — and Stefani's words are an important reminder that there are countless ways to have a positive impact on other people's lives. Women certainly don't have to have children in order to do this. I appreciate that Handler is so open about why it's more than OK to not want children — hopefully, people will take her message to heart.