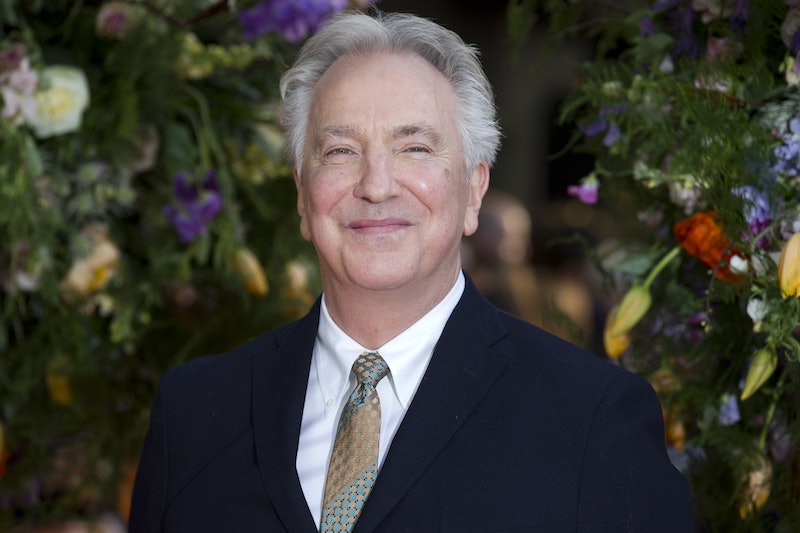 2016 has been an unforgiving year so far when it comes to celebrity deaths. One of the first cutting blows of the year came in January, when British actor Alan Rickman died of pancreatic cancer at the age of 69. He'd kept his illness private, so the news came as a shock to his fans. And those fans are many and of all ages, thanks to a career that encompassed blockbuster action movies, period dramas, romantic comedies, and of course, a certain movie series based on seven books about a boy wizard. From Harry Potter to Die Hard, Rickman used his skill, training, and an instantly recognizable voice to create unforgettable characters. Less than five months after his death, his final performance is making its way to theaters, as Rickman plays Absolem in May 27's Alice Through The Looking Glass.

The sequel to 2010's Alice in Wonderland, Through the Looking Glass sees Rickman reprise his role as Absolem, a caterpillar-turned-butterfly. The sensibilities of inventive director Tim Burton are all over both Alice movies. Like the first film, Alice Through The Looking Glass features a combination of physical and voice performances, as well as several animation techniques. Rickman's contributions to the final film, though, are voice only. While the first movie was still in production, Rickman told Dark Horizons (via Screenrant) that he was also being filmed so that his facial expressions could be incorporated into Absolem's animation. This didn't happen for whatever reason, though, so audiences were only treated to his voice, along with those of Stephen Fry, Christopher Lee, Imelda Staunton, and a similarly accomplished voice-only cast.

In the short featurette clip below, Rickman can be seen prepareing to record dialogue for Alice Through The Looking Glass with co-star Mia Wasikowska. You can hear him telling his colleagues about being filmed during his recording sessions for Alice In Wonderland.

Rickman's last physical performance was also released posthumously. The actor played Lieutenant General Frank Benson in the drone warfare drama Eye In The Sky, which came out in select US theaters in March 2016. But there's something almost magical and otherworldly about the final Rickman film featuring him speaking to his fans from a strange realm and through a cryptic, animated character. His voice is the star of this television promo spot for Alice Through The Looking Glass. "There are matters that cannot be neglected," Absolem tells Alice in the clip. "Hurry."

Johnny Depp, who reprises his role of the Mad Hatter in Alice Through The Looking Glass, recently spoke out about the shock of his co-star's death. "I was really taken aback by that. It was nothing I would have ever expected," Depp told Magic Radio on the red carpet of the movie's European premiere. "He was a vivid man."

Rickman will be missed by all when Looking Glass debuts in theaters.