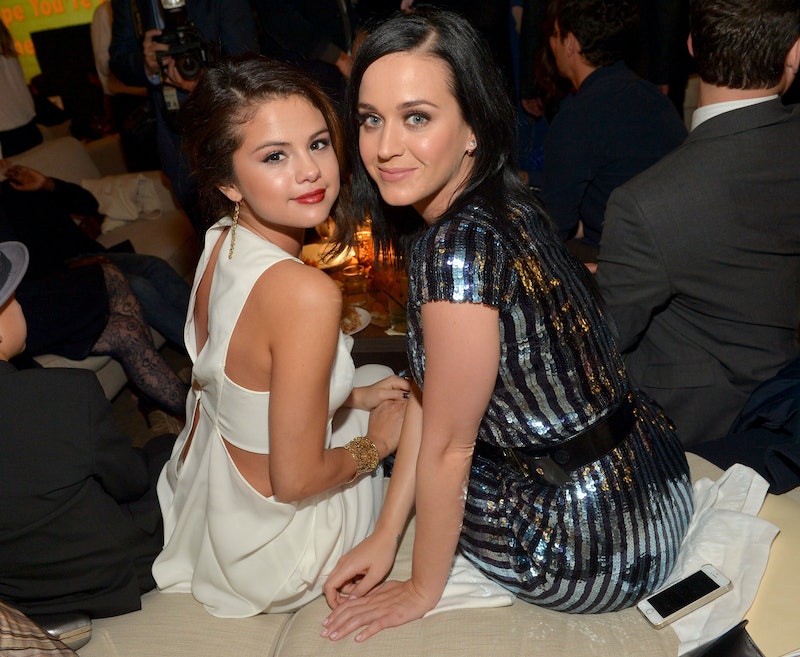 When one of the biggest pop stars in the world and one of the most famous actors in the world start dating, it is inevitable that rumors and lies will try to bring them down. Newish couple Katy Perry and Orlando Bloom recently dealt with a "scandal" when Bloom was spotted looking cozy with Selena Gomez after her Revival Tour show in Vegas. Since then, both of the women involved have slyly responded to the rumors via social media, so this makes me wonder: Are Selena Gomez and Katy Perry friends?

As far as the status of Perry and Bloom's relationship goes, they do not seem to be fazed and still appear to be very happily dating. The couple has been spotted cuddling all over Cannes, hitting up fabulous parties and hanging out with Kate Hudson on a yacht, because why wouldn't you do all those things with your new boo? After the initial reports came out of Bloom cozying up to Gomez in Vegas, Perry and Gomez teamed up and deny the claims on Twitter, proving that they were indeed friendly and both against feeding any rumors about their personal lives.

Their relationship might be confusing for some, considering that Gomez is BFF with Taylor Swift, who Perry has been pitted against since the release of Swift's "Bad Blood." In a Rolling Stone article, Swift said "Bad Blood" was about another pop star who "tried to sabotage an entire arena tour," and Perry entered the fray with the now-infamous tweet below:

Since then, eyes have been on Swift and Perry's apparent "feud" and Gomez has often been thrown in the middle of it all. Back in June 2015, New Zealand radio show The Edge Afternoons asked Gomez bluntly if it was true that she called Perry to discuss her role in the "Bad Blood" video. Gomez responded,

That seemed to confirm that Perry and Gomez were on good terms and friendly. In October 2015, Gomez appeared on Watch What Happens Live and when asked by host Andy Cohen about the "Bad Blood" rumors, she instantly pleaded the fifth, making fans wonder once again what was going on with the two. But how I took it was that Gomez was so obviously over talking about it that she didn't even want to pay any attention to that situation. Wouldn't you be annoyed with people always asking about your BFF's career in every interview?

One thing to remember throughout this is that Gomez has actually been involved in rumors with Bloom herself since 2014, when they were spotted partying together in L.A. Gomez then posted a photo with Bloom and Seth Rogan at an event, which E! claims was the first time they ever met, and it looks like they've been friends ever since.

Since then, Gomez and Bloom have had to ward off dating rumors, but it's been fairly clear that they are good friends and nothing more. Fast forward to awards season in early January 2016, and Perry and Gomez were spotted hanging out together at a Golden Globes after party with Brad Pitt.

Now that I think of it, since Gomez and Bloom are friends, it's seems possible that Gomez introduced Perry to Bloom, because this is the same party when the couple was first spotted getting "flirty."

And all seemed fine and dandy until the photos of Bloom and Gomez in Vegas surfaced. Perry attacked the rumors full force with a tweet trying to avert the negative press and focus on Bloom's work with UNICEF, and Gomez retweeted the link with a gesture that showed solidarity:

I think this proves the point that Perry, Bloom,and Gomez all think this story is a non-issue and that there is definitely no bad blood between Gomez and Perry.