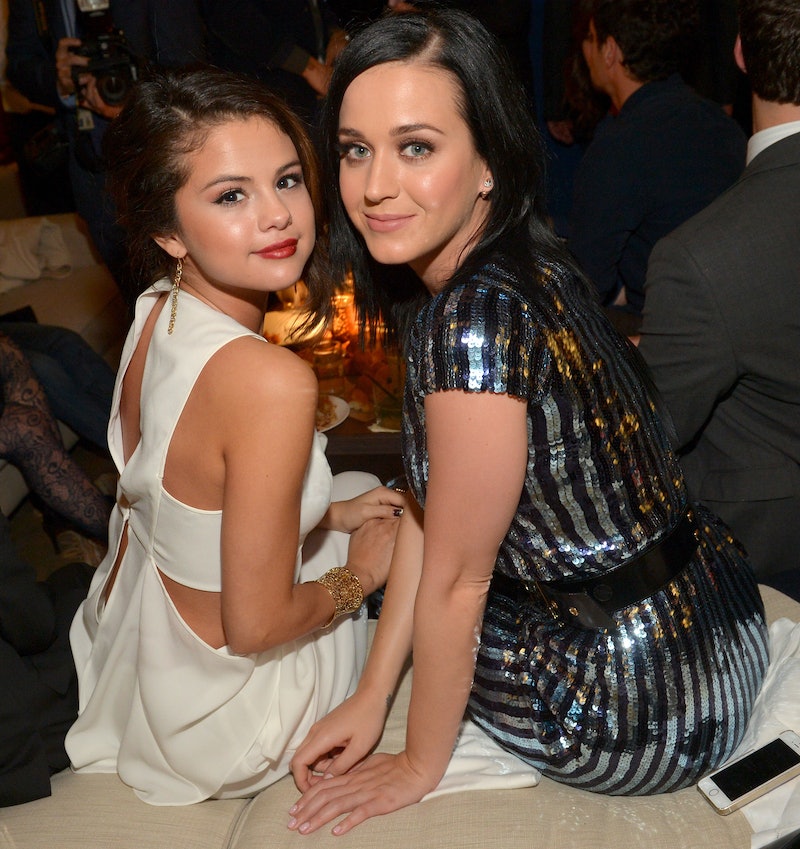 I think it's safe to say that both Katy Perry & Selena Gomez don't have time for nonsense or what they view as ridiculous rumors. On May 7, Orlando Bloom and Selena Gomez were photographed getting cozy in Las Vegas after the kickoff of her Revival tour. Obviously, this sparked speculation that the two are more than friends and had many questioning whether or not Bloom is still dating singer Perry — the duo first made headlines at the 2016 Golden Globes and have been inseparable ever since. Well, in several tweets shared Thursday, Katy Perry and Selena Gomez responded to those Orlando Bloom rumors by showing a united front.

Perry was the first to react, when she tweeted, "Instead of giving energy & eyeballs to dumb conspiracy check out how [COOL] this is." The "Firework" singer then included a link to a TIME article about Bloom's work as a UNICEF ambassador. Perry also added the following hashtag at the end of her tweet, "#dontfeedthebeast."

There are several ways the 31-year-old musician could have reacted to the situation. She could've ignored it altogether and just kept on doing her thing or given a much stronger response and fed the beast, which is something she is clearly trying to avoid. The way she handled it is not only classy, but admirable. Not only doesn't she have time for nonsense, but she isn't looking to fuel the rumors or start a fight over something that she seems to not be worried about. It also goes to show that Perry and Bloom are probably most definitely still a couple, because why else would she tweet out a link supporting the Lord of the Rings actor's charitable endeavors?

As for Gomez, she retweeted Perry's tweet and reacted to it with the hands in the air emoji praising the "Dark Horse" singer's words. Gomez also posted the following tweet, which I imagine is another response to the reports. "#killemwithkindness -one day they'll get it lol," she wrote.

Clearly, there is no story here, after all. If Perry and Gomez aren't worried about it, you shouldn't be either.