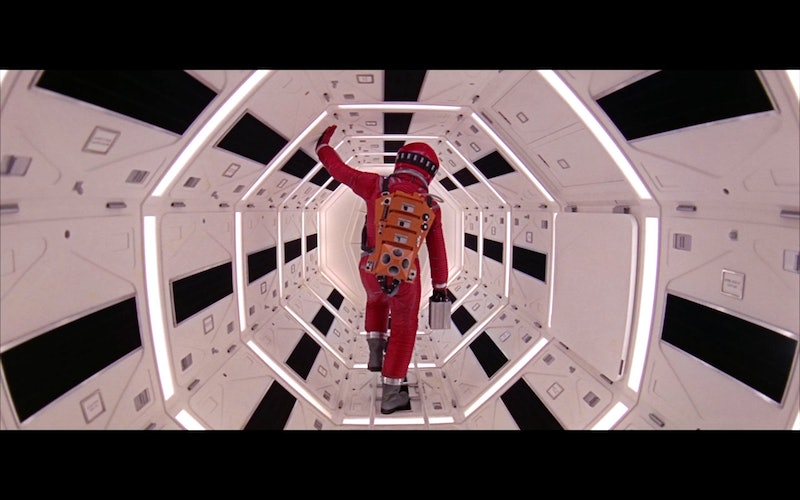 Metro-Goldwyn-Mayer Studios
By Charlotte Ahlin
May 24, 2016

It's strange to me that science fiction is widely considered the silliest literary genre. Sure, sci-fi has its fair share of knobbly aliens, talking apes, and babes in metallic jumpsuits. But it's also the genre that accurately predicted tanks, earbuds, and the internet. It's the genre that inspires real life scientists to do things like go to the moon. For every shelf full of zany space adventures, there are dozens of brilliant sci-fi books that actually predicted the future.

Just to be clear, I have nothing against zany space adventures. I love Douglas Adams, and I think all movies set in space should be required by law to include a furry alien and/or cute robot sidekick (watching Matt Damon skulk around in space can only hold one's attention for so long). But there's something uniquely thrilling about watching inventions go from the page to reality. Submarines, helicopters, tablets, and escalators were all once figments of a sci-fi writer's imagination. Some of these books even go beyond inventions to accurately predict cultural shifts and changes in lifestyle (although we never quite had a cyberpunk revolution where everyone started wearing neon and running around in the internet... not yet, at least).

Whether these books inspired real life inventions or just knew what was coming, here are twelve sci-fi books that got the future exactly right:

Earbuds may not seem like a wacky sci-fi invention so much anymore. Mostly we just think of them as something that must be untangled before we can listen to podcasts on the subway. But when Fahrenheit 451 was published in 1953, "seashell ear radios" sounded like pure fantasy. Tiny radios in your ears? Sci-fi nonsense.

Ernest Cline himself has this to say on the subject of predicting the future: "The future is happening so fast now it’s getting more and more difficult to stay ahead of it. Armada’s plotline involves two concepts—quantum data teleportation and 3-D drone printing—that were still science fiction when I started the book, and then became a proven reality before I finished it. I need to write faster," he tells Bustle.

Looking Backward is a vision of utopia in the year 2000 (not a dystopia—it was written in the 1800s, when sci-fi authors were still allowed to imagine pleasant futures). A man from the nineteenth century winds up in the twenty-first century, where he finds the world is a peaceful place full of shopping malls and credit cards, which, at the time, didn't exist in reality.

4. The Description of a New World, Called the Blazing-Worldby Margaret Cavendish: Submarines

Jules Verne, with all his techno-babble, usually gets credit for predicting submarines in Twenty Thousand Leagues Under the Sea. But Margaret Cavendish was writing sci-fi about underwater vehicles (and atomic theory) in 1666. It's not exactly the hard sci-fi of Verne, since it's full of mermen and talking animals, but it imagines an alternate reality where submarines are possible.

The name may not trip off the tongue, but Ralph 124C 41+ is the first sci-fi book to give us the concept of radar and video phones. That is, Hugo Gernsback was writing about video-chatting in 1911, before television even existed. And radar wasn't properly invented until 1933, but Gernsback describes detecting objects through waves in great detail. That's a two-in-one spot on prediction (but several points off for naming your book Ralph 124C 41+).

6. Neuromancer by William Gibson: The Internet

Neuromancer gets the internet almost right. On the one hand, it predicts a world wide network of computers and information sharing at a time when personal computers where still a new concept. On the other hand, it assumes that the internet is going to be a jacked up cyberpunk crazy town where you can jump around in virtual reality while wearing sick jumpsuits, rather than a place to view cat videos.

H. G. Wells never went as far with the hard sci-fi tech stuff as Jules Verne did, but his books were just as influential. The War of the Worlds inspired the first liquid-fueled rocket. The Land Ironclads is all about tanks, before tanks were actually invented. But The World Set Free might be his most chilling prediction, because it's a novel about nuclear warfare written in 1914. He actually uses the phrase "atomic bomb," and describes the devastating effects of radiation. (Don't worry, though, it's an anti-war novel that ends with humankind creating a utopia of artists and thinkers... let's hope he's right about that part, too.)

8. Tom Swift and His Electric Rifle, Or, Daring Adventures in Elephant Land by Victor Appleton: Tasers

The Tom Swift books were along the lines of Nancy Drew or The Hardy Boys, but centered on an irritating boy inventor. In Tom Swift and His Electric Rifle, he invents a rifle that shoots bolts of electricity (which he uses to kill Elephants for their ivory... there's a reason no one reads Tom Swift anymore). Not only did Tom Swift inspire a real life electroshock weapon, its inventor named it Thomas A. Swift’s Electric Rifle, or TASER.

2001: A Space Odyssey is not quite so interested in predicting future technology as it is in talking about humanity's metaphysical place in the universe. But it still manages to predict tablets. Or rather, "newspads," where you can scroll through and read articles on a handheld screen (although it still has to be plugged in, even in space).

10. The Roads Must Roll by Robert A. Heinlein: Escalators

In The Roads Must Roll, Heinlein accurately predicts "electric staircases" that move automatically, as well as those conveyor belt things you walk on at airports. Unfortunately, the rest of this story predicts that all sidewalks, highways, and railroads in the U.S. are going to be replaced by conveyor belts (moving at 100 mph). And that... hasn't quite happened yet.

Click here to buy works by Robert A. Heinlein.

11. Stand on Zanzibar by John Brunner: Hook Up Culture, Electric Cars, and Techno Music in Detroit

Stand on Zanzibar is almost creepy in its prescience. It was written in the '60s, and it's set in the future of 2010: cars are electric, Detroit is in economic ruin, everyone's listening to EDM, America is plagued by school shootings, hook up culture reigns among young people, and the leader of the United States is named President Obomi. Um...

12. From the Earth to the Moon by Jules Verne: The Moon Landing

Jules Verne was all about that hard sci-fi. So much so, in fact, that he didn't write about gadgets unless he could figure out exactly how they'd work in the real world. Twenty Thousand Leagues Under the Sea may not have predicted submarines, but it did predict electric submarines. Clipper of the Clouds predicted helicopters. And, of course, From the Earth to the Moon predicts the moon landing. It was written in the 1800s, and yet Verne accurately predicted the cost of the launch, the amount of force needed to propel the rocket into space, the material of the capsule, and the fact that lift-off took place in Florida. The only thing he got wrong was the stuff about the rocket being shot out of a giant canon but... close enough.

More like this
'The Sandman’s Ending Is A Departure From Neil Gaiman’s Comic Book Series
By Kadin Burnett
I've Read The Harry Potter Books 30+ Times & This Plot Hole Haunts Me
By Kelsey Stiegman
'Bridgerton’s Jonathan Bailey & Simone Ashley Just Teased A First Look Of “Kanthony” In Season 3
By Grace Wehniainen, Alyssa Lapid and Sam Ramsden
The Biggest Differences Between 'Bullet Train' & The Book It’s Based On
By Arya Roshanian
Get Even More From Bustle — Sign Up For The Newsletter