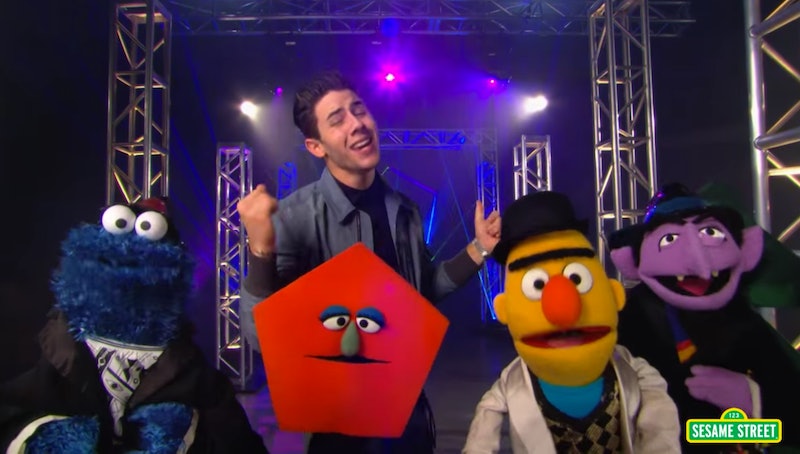 We've all been there. You got discovered at 6 years old singing in a barber shop, you formed a Columbia Records-signed band with your brothers, you launched a solo career, you did a little TV work here and there, and then you get asked to perform an educational song on America's most popular kids' show. Just imagine: a Nick Jonas Sesame Street collaboration. You say yes, because obviously. You don't get this far without keeping your eyes on the prize: money, fame, reaching that all-important pre-school demographic. But you're a heartthrob. A red-blooded American male. So you can't help but pen a song that, while ostensibly an educational ditty to teach children about shapes, is actually just a paean to the sweet, sweet act of lovemaking.

That song is "Check That Shape," and it's our generation's "Sexual Healing." Many a lazy afternoon will be spent in bed to this record. The statement accompanying the Sesame Street press release states "The beat is catchy and viewers will enjoy Nick’s signature swagger that he brings to the song." Oh, but what signature swagger.

The song opens on the line "There on the floor is a shape moving towards me" and continues "What is the shape that is dancing there?" I hate to cast aspersions, but to me the shape doesn't sound like a hexagon or an octagon. It sounds like the shape you get in sticker form on backs of trucks the world over: a sexy lady shape.

My suspicions built further when Jonas crooned "It's the shape that is so fine/that shape drives me out of my mind." I don't know about Jonas, but, personally, I have never been pushed to the edge of lustful madness by a hexagon. However, maybe I don't know as much about shapes as he does. This is a genuine possibility. After all, nobody has asked me to pen a song on the topic. Perhaps he is an expert. Perhaps he knows something we don't?

Then there is a line that sounds like, but which cannot possibly be, "Hot with moves and how the shape slides." No. I refuse to accept Jonas has anthropomorphized the shape to such a degree that it is now a Pharrell Williams backing dancer-style shape, shimmying across the dance floor. The video itself is no better. Jonas performs pelvic thrusts, bites his lip and contorts his face into the expressions more in line with those seen in the middle of a strenuous bout of lovemaking. We may have learnt more about what Jonas is like in bed from this one video than from the entirety of his upcoming album, Last Year Was Complicated.

In summary, this is the best thing on TV you'll see all week. Not to mention entirely inappropriate and all the better for it. If you never thought you'd become attracted to Nick Jonas from watching him on Sesame Street, well. Welcome to the real world, pal.