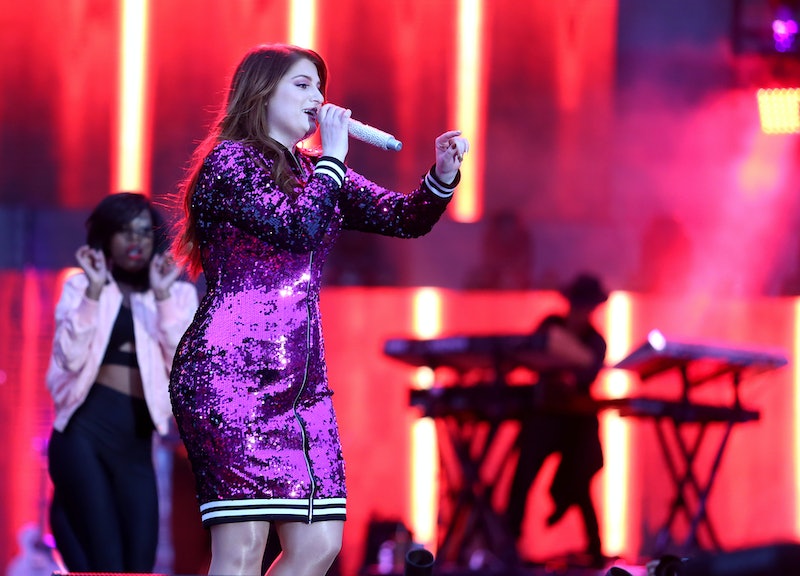 America's pop sweetheart sang out her gratitude to fans in an intimate concert in New York City. The Meghan Trainor Vevo Presents concert involved the singer performing songs off her most recent album Thank You and encouraging her fans attending the gig to take the role of backup singers. The songs included in the show were her most recent hit-single "No," "Hopeless Romantic," and "Just A Friend To You."

The Vevo Presents franchise is, as the name implies, an initiative from the music video channel that puts on shows for "top-tier artists." In the past, this has included musical stars as varied as Ellie Goulding, Kendrick Lamar, Kasabian, Lady Gaga, Demi Lovato, and Ellie Goulding. Clearly, it's not about a specific type of music so much as talent (or, if I were to be cynical, name recognition?).

Entertainment Weekly just released some videos from the performance, and what's so heartwarming about the clips is how genuinely engaged by her fans Trainor seems to be. Maybe it's to be expected. Trainor has clearly always wanted to be a successful and famous musician, producing and self-releasing three albums between the ages of fifteen and seventeen, and she seems to have a relationship with her fans that's shaped by this. She seems appreciative rather than annoyed by them. So where do we see this in her performances?

We See It In Her Dialogue With The Crowd In "No"

"All right, well let's sing it together then," says Trainor at the opening of "No," and they genuinely do. It's not your traditional performance; Trainor breaks off in the middle of the song to make little asides to the crowd. "Wow, you really know this!" she exclaims just two lines in. She even plays the conductor, telling the crowd "Wait for it!" just before the guitar hits. She grins at the guitarist: "I got background singers."

"I can't believe you know these words!" Trainor exclaims after beaming the whole way through the song up until this point.

We See It In The Delicate Acoustic Guitar In "Hopeless Romantic"

Acoustic guitar = a seriously intimate venue. This clearly isn't a show she's doing to sell a bunch of tickets or for the ego boost of playing a packed stadium. No, this is a pure thank you to fans.

Trainor's never been your typical celebrity, and maybe it's because she's worked so hard to get where she is. As she grew a little older, she attended songwriting conventions, won awards (including Best Female Artist at the 2009 International Acoustic Music Awards, and the Grand Prize at the 2010 New Orleans Songwriter's Festival, the 2011 Tennessee Concerts Song Contest and John Lennon Love Song Songwriting Contest), and travelled around the country to write, produce and sing back up for other artists, creating her own musical network despite not being based in somewhere easier to catapult into stardom from, like LA or New York.

Now she's enjoying basking in the well-earned adoration of her public, and it's beautiful to see.