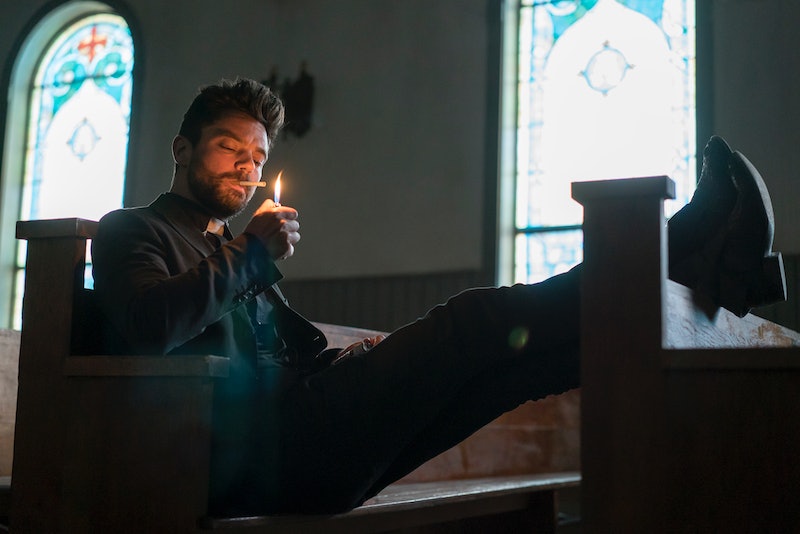 Whenever a beloved piece of source material is adapted into a film or a television show, there's usually only one thing that fans want to know: how faithful is the adaptation going to be to the original? Different shows have approached this question in different ways, from the strict faithfulness of the first four seasons of Game Of Thrones to the loose re-interpretation of The Walking Dead and the wholly original later seasons of True Blood. So how will AMC's newest drama tackle this thorny problem of adaptation? How faithful will Preacher be to the comics?

Maybe you're starting to see the problem. AMC may not be a broadcast network, but it's also not a premium channel like HBO; it still has to answer to cable standards of decency. How could a faithful adaptation of this source material possibly make it to the airwaves?

The answer is: it won't. Not exactly, anyway. The creators of AMC's Preacher — which include actor Seth Rogen — have long been clear about the fact that their show will be a rather loose adaptation of the comics. This seems inevitable, considering how many studios have tried and failed to bring the source material to the screen (with James Marsden once attached to star as Jesse Custer). So what makes AMC's version different? Why has it succeeded where so many other attempts have stalled?

The fact is, AMC's Preacher was originally intended to be wholly faithful to the comics — but when it became clear that approach wasn't working, they weren't afraid to throw everything out and start from scratch. "We came in with a bunch of boards with the characters and we pretty much said, 'We’re going to do the comic,'" co-creator Evan Goldberg (This Is The End) told Entertainment Weekly last week. "We actually pitched, 'It’s going to be like Sin City, frame-for-frame, almost. We’re going to be really true to the comic.'"

The problem with that plan turned out to be that the comic "starts at 110 miles an hour," the third co-creator, Sam Catlin (Breaking Bad), told EW:

I don’t know how you tell that story in the narrative television form. So, came up with the idea that we would see Jesse as a preacher — because he’s only very briefly a preacher in the comic, and then he’s just kind of a bad-ass guy in a preacher collar. We thought there would be an opportunity to see someone try to do their job, be sort of the spiritual sheriff for the town. There’s so many big set pieces and crazy, over-the-wall violence, comedy, stuff like that. We wanted to ground it in something familiar, so that it didn’t feel like a bad acid trip.

Diehard fans of the original Preacher may be worried to hear that Rogen & Co. don't plan to be faithful with their beloved comics; but they should rest easy knowing that the team has the full blessings of its author, Garth Ennis. "Garth very much encouraged us to make a lot of small changes and to make it a good show first and foremost," Goldberg said at the show's Television Critics Association panel last January.

If AMC hopes for the series to be successful, then they'll need to attract more viewers than just the people who are already intimately familiar with the comics — a fact which the creators are well aware of. "We are fans of the comic," Rogen stressed at TCA. "We love the comic, and we are going to make a show we like. So we hope that that translates to people who love the comic as well. But, again, our first and foremost goal is to make a great, entertaining, fun television show that, if you’ve never heard of the comic book, you love."

Of course, this being a mass-marketed TV shows, not all of the alterations made were sweeping plot changes — just as many came down to nitty-gritty choices surrounding the show's notorious level of violence and gore. For example, the character of Arseface (a disfigured young man who survived a self-inflicted gunshot to the face) was toned down for television. "There had been something online of some test someone had done that looked exactly like it looked in the comic," Rogen said at TCA. "As soon as I saw that I knew we should not make it look exactly like it looked in the comic and make it a little more palatable. We wanted the character to be sympathetic." Other choices were more mundane: Catlin told the audience at TCA that, "We had a long talmudic argument" about whether a character "should have his ear bitten off or his nose. It basically went, 'The nose, that’s just disgusting, you can’t do that.' So we went with the ear."

All of these changes, large and small, seem to have paid off; early reviews of Preacher are largely positive. Critics who approached the show as comics experts have been pleased: "As someone who owns every issue…, I enjoyed the hell out of the first four episodes," wrote HitFix's Alan Sepinwall. And critics who approached the show completely uninitiated were equally intrigued: "As a Preacher newcomer, there were more than enough incredible individual sequences to make me curious to see more," wrote Collider's Perri Nemiroff.

Whether that translates into ratings success on par with The Walking Dead remains to be seen, but at least comics fans can rest easy knowing that their beloved Preacher is in the hands of writers who have genuine love and passion for the source material, and who seem committed to crafting an exciting experience for the expert and the layman alike.