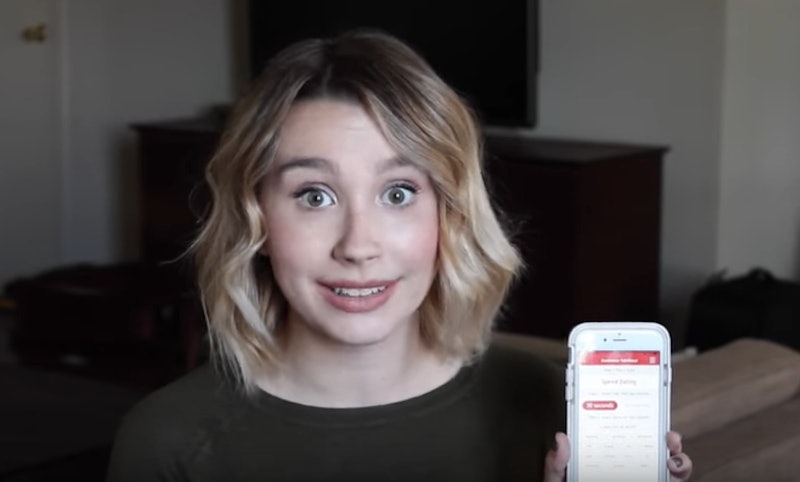 The new language app LikeSo is on a mission is to make people more articulate — you know, whatever that um, like, means or whatever. The iOS app uses voice recognition technology to analyze personal speech patterns and evaluate eloquence, pace, diction, and the kicker — how many "filler words" you use. In Amanda Montell's latest episode of Wifey TV's webshow The Dirty Word she reviews the speech coaching app, and shows that while its crusade against filler words is more controversial than you might think, using the app can be pretty fun.

LikeSo was created by Audrey Mann Cronin. The communications consultant was inspired to develop the tool after noticing her teenage daughter's use of filler words growing, reports USA Today. And it turns out, women in their late-teens and early 20s pepper their speech with more filler language than the rest of the population. We all want to seem intelligent at a job interview, or well-spoken in class, but will frequently using filler words such as “so,” “like,” “um,” and “you know what I mean” really make us sound, well, Clueless?

Montell points out in the video that there are actually two kinds of filler words. "Uh" and "Um" are exclusively used to fill pauses in a conversation, buying the speaker a moment to process their thoughts. The filler words that get the worst rap — "like," "ya know," "literally" and so on, are discourse markers (less valley-speak discourse markets include "well" "frankly" and "I mean"). These words serve the opposite purpose, instead of smoothing over pauses, they break up the speech into different segments. Far from their mindless "filler" reputation, these discourse markers manage conversation.

A 2014 study performed by researchers at the University of Texas found that over-using filler words isn't just a teenage girl speech tic. Researchers recorded participants' speech over several days and monitored the filler words used in daily conversation. They found that discourse markers were most frequently used by younger people, women, and conscientious people. These seemingly useless words could be personality markers among conscientious people who use these words "to imply that they are open to sharing or even rephrasing their opinions," says Montell.

In her review, Montell also points to other research that reveals the phrase "you know" is frequently used to check if the listener understands what the person is saying. These words are not signals of lesser intelligence or that a person is inarticulate — however, when in a high pressure scenario like public speaking or a job interview, the use of these words can get out of control. This is where the LikeSo app may come in handy to help (especially if you like colorful charts and graphs!).

When logging into the app, LikeSo will prompt you with two ways to test your speech. You can choose "FreeStyle," where you talk about whatever you want for a set amount of time, or "Talk About" where you can choose from different topics or styles of conversation. It then gives you the option to answer questions in time limits of 60 seconds or 30 seconds. You can also select exactly what filler words you want the app to "listen for," or it can "Listen for all words."

While you speak for the designated amount of time, the app tracks the chosen words, and pace of speech. Once the exercises are completed, you will instantly be shown results — rating your articulation, how many words were spoken overall, and which filler words were most frequently used.

You can save the results and even track progress overtime, which is great for breaking bad habits. As the app says on its website, "LikeSo is your personal speech coach. LikeSo offers a private and fun way to train against your verbal habits and practice speaking articulately, confidently and without the “like, ya know” syndrome."

"Regardless of whether you think filler words are a problem, or you want to get rid of them, I just think it's really fun to have an objective party evaluate your speech," says Montell.

To see the entire review, check out the full episode of The Dirty Word here:

You can purchase LikeSo on iTunes for 99 cents. So check it out, and, like, see once and for all how many time you say "like."