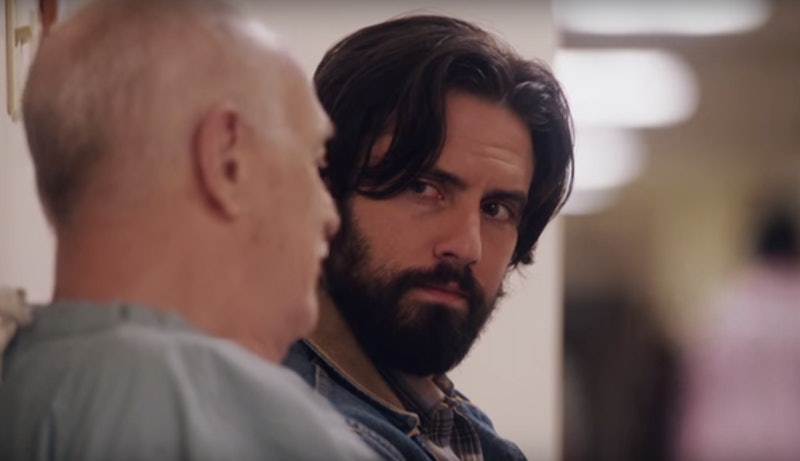 The fall TV season is still officially a few months away, but one show has already earned itself the title of the most popular new show of the 2016-2017 television season — based on how many people have watched its trailer, anyway. According to Entertainment Weekly, the new Milo Ventimiglia show, This Is Us, has earned over 2.6 million views on YouTube and 20 million views on Facebook. This was all in just three days. Deadline reported that This Is Us actually shattered the record for most Facebook video views of a new-show trailer during the week of TV upfronts, which is the 7-day period when networks reveal their new shows for the fall. In 2015, by the CW’s Legends Of Tomorrow had 4.1 million views in 48 hours; This Is Us got 15 million views in that same amount of time. The only show from upfronts that has more streams on its trailer is the Prison Break reboot with nearly 5 million views. It's clear there's something about This Is Us that is getting people hyped up — but what exactly is it?

First, we have to look at the one very obvious reason this trailer might be racking up the views: Milo Ventimiglia. It doesn't hurt that you see him in his "birthday suit" in the very first shot of the trailer. Gilmore Girls fans are very supportive of the show's alumni, and Jess Mariano holds a certain place in fans hearts (team Jess forever). But, the fact that Ventimiglia's been talking about the Gilmore Girls revival probably makes him a name that people have on the brain.

But, even if the prospect of seeing Ventimiglia nearly nude is a fan's reason for clicking, they might click again once they see how sweet Ventimiglia's character seems to be. When his wife, played by Mandy Moore, says she doesn't understand how he could be attracted to her being as pregnant as she is (she's having triplets), he just says "In any state my wife, you arouse me." Swoon.

Ventimiglia isn't the only noteworthy star on this show, which looks at different characters who all share the same birthday. The exciting part of this series is clearly seeing how all these people are connected beyond being born on the same day. As mentioned, Moore is taking on a serious role as a new mom who loses one of her children during childbirth. Sterling K. Brown, who just played prosecutor Chris Darden on The People v. O.J. Simpson, also stars on the show as a man reuniting with the dad who gave him up 36 years ago.

The show also features American Horror Story actress Chrissy Metz, whose character is struggling to lose weight. In this first trailer, we watch her throw away all the junk food in her house and fight with herself through Post-Its over eating a piece of birthday cake. These characters are people you want to root for as they try and navigate life's complications.

This Is Us also bears a striking resemblance to NBC last great drama, Parenthood. The Parenthood comparison is one that Ventimiglia recently made too on the Gilmore Guys podcast. "You are gonna be crying, but you're also gonna be laughing and joyful," Ventimiglia said about his new show. "The way I look at it, is only because of my last 15 years of work, y'know, I'm like, 'There's no aliens, there's no superheroes, there no guns there's no uniforms.' It's just people talking."

A show about "just people talking" seems to be working though. And that's likely because it feels like so much more than that. It feels refreshing to see real people doing real things. Written by Dan Fogelman, who is responsible for Crazy, Stupid, Love, these characters feel like people you know — or even better, want to get to know. By the look of the number of shares on Facebook (over 206,000) it's resonating with people, who are writing comments like, "My mother and I used to watch these type of shows all the time when she was still alive." Another person wrote, "Finally, a show that unites us and shows us that we all struggle with the same things."

This Is Us deals with real life, which, for those who feel like they can't get away from the fantasy worlds of other television shows, may just be happy to get a reality check.