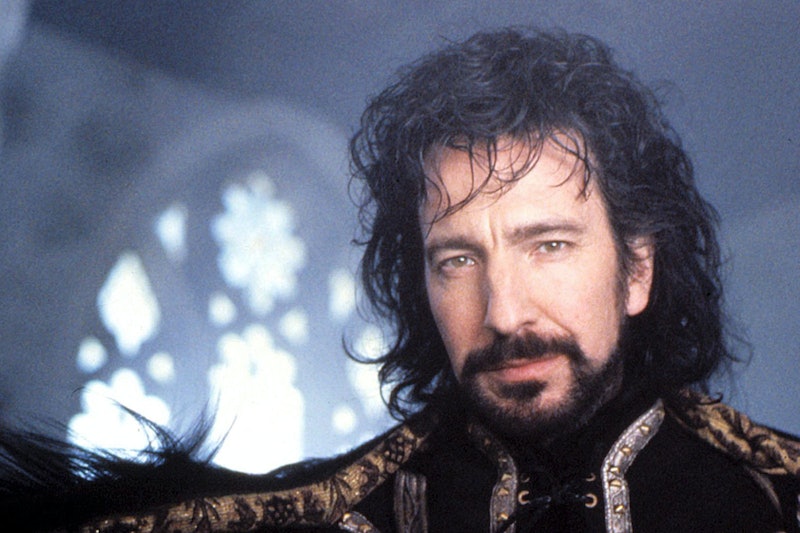 When Alan Rickman passed away in January 2016, generations of fans mourned the beloved actor's death. Four months later, his last film, Alice Through the Looking Glass , is debuting in theaters, and the release is bittersweet. Back in March, audiences got to experience Rickman's gifts in live-action one last time when he acted alongside Helen Mirren in Eye in the Sky, but his final role is solely voice work, as heard through Absolem, the blue caterpillar, in Alice. Rickman's life and work spanned genres and touched many; there are those who know him best as Professor Snape in the Harry Potter movies, those who remember him as villain Hans Gruber in Die Hard, and those who know Rickman from a dozen roles combined. My personal favorite Rickman performance, though, and the one I'm remembering now in light of his final role in Alice, comes from one of my favorite childhood films, 1991's Robin Hood: Prince of Thieves.

Now considered a guilty pleasure by many, Robin Hood: Prince of Thieves stars Kevin Costner as the titular legendary bandit who robs from the rich and gives to the poor. Rickman brilliantly plays the Sheriff of Nottingham, who is tasked with capturing outlaws such as Robin but also makes a mad grab for the throne of England while King Richard is fighting in the crusades. The movie was a massive box-office success, grossing over $390 million worldwide, and I remember going to the theater as a kid to see it when it premiered, excited about viewing my first PG-13 movie. Although the film has plenty of violent, bloody moments, my mom had a huge crush on Costner in those days, so she probably ignored the rating altogether and let me see the movie — a good idea, considering how much I continue to love the film today.

Prince of Thieves has its flaws, for sure. Costner's English accent is downright non-existent, and co-star Christian Slater's is just bad. Maid Marian, played by Mary Elizabeth Mastrantonio, starts out as a knife-wielding badass only to become a victim in need of rescue by the end of the film. But while some people may look back on this film with derision, I look back on it only with love and frequently give it a re-watch. For one thing, it's loads of fun. Swashbuckling sword fights mixed with quippy wit have really never been better, and English accent or none, Costner has loads of charm. The merry men are varied and hilarious, the action is dramatic and intriguing, and the love story is sweet. That's not even mentioning Morgan Freeman's Azeem, who's a wise-cracking but loyal friend whose funny one-liners basically make him a walking meme.

But the most outrageous, and most memorable performance in Robin Hood: Prince of Thieves has got to be Rickman's. He is so wild as the Sheriff of Nottingham that I'm pretty sure there had to be some point early on in the film's shooting that Rickman stopped trying to be the seriously trained theater actor that he was and decided to go balls to the wall, hamming it up to oblivion. Between his crazy eyes, odd vocal patterns, and general air of wackiness, Rickman's ostentatious villain is one of the most entertaining in movie history. He's so beguiling in his nastiness that you almost root for him to win. Just look at this famous exchange, after the Sheriff threatens to cut Robin's heart out with a spoon:

Guy of Gisborne: "Why a spoon, cousin? Why not an ax?"Sheriff: "Because it's DULL, you twit! It'll hurt more!"

Looking back at Rickman's career, it's no doubt that he was an amazing actor with many brilliant dramatic roles on his resume. But I'm glad he also got to have fun with his career every now and then, showing off his comedic chops in movies like Prince of Thieves. Rickman's willingness and ability to turn what could have been a boring period baddie into one of the most exciting elements of a movie is a highlight of his career, and I'd bet that it inspired actors in later generations to occasionally ham it up in some fun projects. (Who can deny that Eddie Redmayne totally channels Rickman's Sheriff as the villainous Balem Abrasax in Jupiter Ascending ?) The Sheriff's (spoiler!) death scene alone is a lesson in drawing out every drop of melodrama possible, and it's gloriously wonderful to watch.