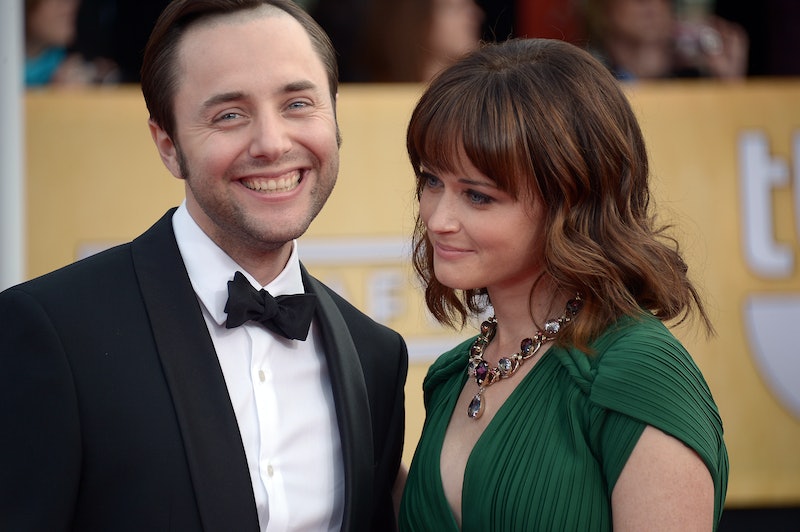 Oh, how time flies. It was just yesterday that Rory Gilmore was graduating from high school with her sights set on an Ivy League education. Now, Rory is a full-blown adult who we will get to catch up with when the Gilmore Girls revival begins streaming on Netflix. Obviously, it's not just the Gilmore Girls character who has gone from girl to grownup, though — so has the actress who played her, Alexis Bledel, and in a big way. According to Bledel's Gilmore Girls co-star Scott Patterson's new interview with Glamour, Alexis Bledel and husband Vincent Kartheiser had a baby, which is fairly shocking for fans considering a majority of them did not know Bledel was pregnant. So, of course, the question is begged: Where can we all see pictures of Bledel and Kartheiser's son? Well, hate to break it to you, but sorry, fans — you might never get the opportunity.

Patterson, who will reprise his role of Luke on Gilmore Girls, dropped the news about Bledel's new parental status when he told Glamour that Bledel was a "proud new mom" who had a son a year and a half younger than Patterson's own child (who was born in July 2014). Until Patterson's interview, very few people thought that Bledel was with child at all (though savvy celebrity gossip hounds may have seen the Celebuzz story that stated Bledel was pregnant in November of 2015). Since Bledel and Kartheiser stayed quiet when the rumors bubbled up, I think it's fair to say that they don't feel the need to answer to the press, no matter how nosey.

Though Patterson's interview suggests that Bledel may have become more comfortable with sharing news about her son now that he is reportedly several months old (that, or Patterson should be sending Bledel an apology Edible Arrangement very soon) it doesn't seem like Bledel wants to give all of the details to the press about her family. This is indicated by the fact that she didn't even reveal she was pregnant or had given birth!

That's totally fair, of course: we may love Bledel's work, but she has no responsibility to share details about her personal life with fans. In fact, her stance seems to be pretty similar to Eva Mendes and Ryan Gosling's, who had not one, but two babies without telling the world their pregnancy details.

While we may not get to see pictures of Bledel's baby any time soon, though, I'm sure that he's absolutely adorable.