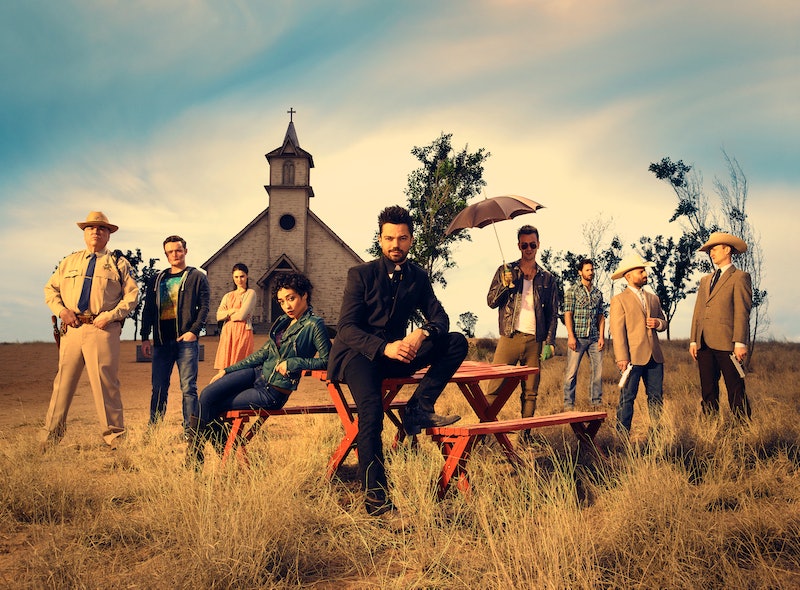 The latest comic book adaptation is about to hit our small screens on May 22 and it looks like a doozy — AMC's new series Preacher focuses on Jesse Custer, a West Texas preacher who joins forces with his ex-girlfriend and an Irish vampire on a journey to find God. Instead, they're thrust into a strange world that's inhabited by members of Heaven and Hell. With an amazing cast headed up by Dominic Cooper, Ruth Negga, and Joseph Gilgun, trailers indicate this will be one creepy supernatural show — but with plenty of dark comic relief. Needless to say this won't be the most realistic series we've ever seen, but is the Preacher setting of Annville, Texas a real place?

Annville is just as fictitious as the parallel universe that will be traversed by the show's characters — but the setting will be important to the show. In fact, Complex describes Annville as "just as much a character as the humans and sub-humans who inhabited it." The outlet also notes that the "backwoods" town will be full of bigoted heavy drinkers who aren't exactly the most intelligent bunch. Unlike in the comic book series, we'll get to know Jesse's parishioners and he'll seek to save their souls.

Before Preacher premieres, let's get to know some of Annville's residents — courtesy of their character bios on AMC.

Before all hell breaks loose (pun intended), Jesse will return to his hometown of Annville to lead his father's church. His priorities will understandably shift when he finds himself inhabited by a mysterious entity. In an interview with Collider, Dominic Cooper teased that his character is not "as nice" as he initially appears: "He does some pretty dark stuff and I reckon it’s probably gonna get worse and worse," he told the outlet.

Jesse's ex-girlfriend (and the love of his life) is a violent force to be reckoned with — and she'll stop at nothing to get what she wants. However, Negga told The Hollywood Reporter that she worked hard to prevent her character from becoming a cliché. Instead, her goal was to "make [Tulip] as nuanced as possible and distance myself from clichés that are unapologetically violent."

Cassidy isn't a native of Annville — he stumbles upon the town and immediately becomes best friends with Jesse, despite their conflicting belief systems. (Oh yeah, and Cassidy's a vampire.)

A widowed mother of three, Emily is a devoted member of Jesse's church — but she has a surprisingly dark side. As reported by Yahoo! TV, Emily wasn't a character in the comic books and she was created for the TV series. The outlet also teases that she has "a bit of a crush on Jesse," so I predict that she and Tulip will not get along terribly well.

The Annville town bully will be less than pleased when Jesse publicly undermines him — and he'll seek revenge. The New York Post adds that Donnie is a "wife-beating Confederate re-enactor," so we'll definitely find have at least one villain on our hands before Jesse & Co. venture into Hell.

Shunned by most of Annville's residents because of his facial deformity, Eugene is a teenager who will quickly become attached to Jesse. In an interview with Dorkshelf.com, Ian Colletti described Eugene as an empathetic character and said that:

"One of my goals eventually as the series continues to progress is for fans to begin to see Eugene very much as a human being — a person they can empathize with — and not just see him for his disfigurement."

Eugene's dad is a "conservative redneck" who's seriously skeptical of Jesse. According to MoviePilot.com, Hugo will be a way bigger character in the TV series than he was in the books — and he's an incredibly lazy sheriff who prefers to look the other way rather than actually do his job.

If Annville, Texas was a real place, I'm not sure that I'd be clamoring to visit there anytime soon — but I can't wait to see what happens in the town during Season 1 of Preacher.