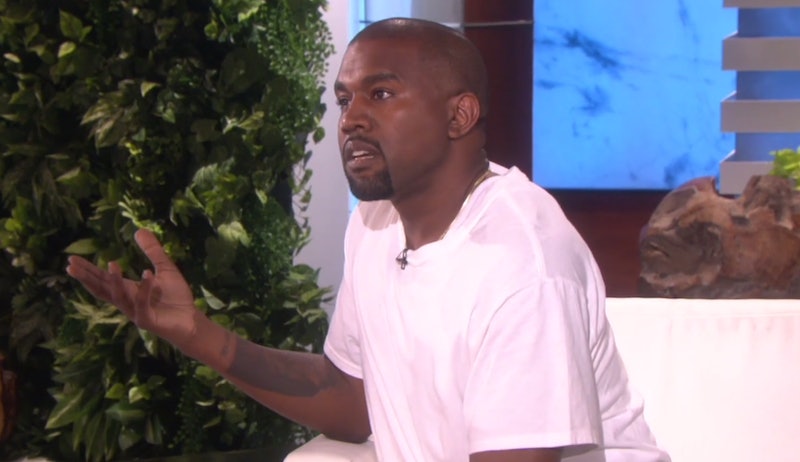 And the rants of Kanye West continue. During an appearance on The Ellen DeGeneres Show, airing Thursday, Kanye West went on a rant, as per usual. And by rant, I mean a really, really, really long speech from the rapper who can't help but give an impassioned talk wherever he is. Really, he should probably appear on Scandal and have a showdown with Papa Pope over who can give the longest and most powerful monologue. From DeGeneres asking the The Life of Pablo artist if he regrets anything he has said (FYI, he doesn't, because "What's the point of thinking?") to West spewing off how he can make the world a better place, he covered it all. But, if you sort through his long-winded interview, West actually ended up making a really good point about how humankind needs to come together as one.

Don’t tell me about being likable. We’ve got 100 years here. We’re one race. The human race. One civilization. We’re a blip in the existence of the universe, and we’re constantly trying to pull each other down. Not doing things to help each other. That’s my point. I’m shaking, talking about it. I know it’s daytime TV, but I feel I can make a difference while I’m here. I feel I can make things better through my skill-set. I’m an artist.

Despite what you may think of the rapper — and whether or not you believe he sometimes just really needs to not open his mouth — what he's saying about how people need to start uplifting one another, instead of being on opposite sides, is so true. Can you imagine what the world would be like without bullying, negativity, and unkindness? It would be a new and improved place, for sure, and one that would probably be way more successful and amazing than it currently is.

I'm sure DeGeneres also agrees with West. I mean, she ends her talk show every day by saying, "Be kind to one another." As DeGeneres said during her Humanitarian Award acceptance speech at the 2016 People's Choice Awards, "It's a little strange to actually get an award for being nice, and generous, and kind, which is what were all supposed to do with one another. That's the point of being a human." She added,

I read an amazing quote recently: “What if there was no love, just proof of love?” I don't know if it was from the Bible or an Instagram, but it was really powerful to me. So my wish is for — We have a lot of people watching in a lot of different countries, and I want everyone to know that we really, really love one another. Deep down we all love one another, and we need to get back to that.

It sure seems like DeGeneres and West are striving for the same thing — to make the world a greater and kinder place, which would surely make it a more productive and influential place to live.

West also pointed out just how short life is. Far too often, people take life for granted and forget that they only have one chance to do what they love and to impact not only their own lives, but others', too. Nobody lives forever, so why not try to make a difference right now than waiting until it's too late? Granted, sometimes West can go over the edge when trying to make change, but he has the right idea.

One of the things I like about West — and this is coming from someone who is hardly a fan of the rapper — is how he's not concerned about "being likable." As hard as it may be, sometimes you just have to ignore all of the haters and do you. You aren't going to get very far in life if you're wrapped up in what everyone else thinks about you or are worried how people will perceive your every move. I think it's safe to say that West definitely doesn't live his life like that.

So, can he be the person to change the world for the better? Well, he certainly thinks so. Remember when he tweeted Facebook's Mark Zuckerberg asking for $1 billion? That didn't really go as planned, but funnily enough, West admitted to DeGeneres that he probably should've reached out to Zuckerberg on Facebook.

As West told the Emmy-winning comedian, the point of trying to get in touch with the social media mogul was for the greater good. "I feel if I had more resources, I could help more people," he said. "I have ideas that can make the human race existence within our hundred years, better. Period."

Knowing the Yeezy fashion designer, he won't give up anytime soon in his attempts. I definitely admire his passion and his beliefs that greatness can come from people joining forces. Too bad he can't just say it in a few words, but, hey, then that wouldn't be Kanye now would it?