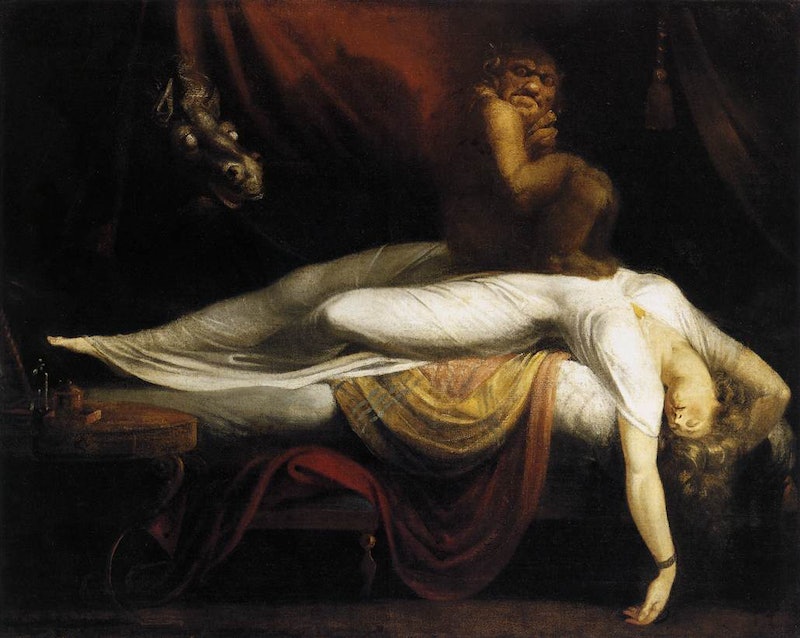 Have you ever woken up at some ungodly hour of the night with the unshakeable certainty that something is in the corner of the room, and it's not particularly friendly? If so, congratulations! You've experienced one of the signs of sleep paralysis, a sleep disorder that's just as terrifying as it sounds. Unlike nightmares, people who experience sleep paralysis are actually awake — or rather, part of them is.

Sleep paralysis has been around for thousands of years; according to the Sleep Paralysis Project, there are reports dating back to ancient Greece and medieval Persia, and Henry Fuseli's most famous painting, "The Nightmare," is believed to be inspired by the phenomenon. However, it was only recently that researchers began to get a handle on what causes sleep paralysis. According to Psychology Today, sleep paralysis is the result of a mismatch between your brain and your body during transitions from REM sleep. During this stage, your body's voluntary movements are temporarily paralyzed to prevent you from acting out your dreams. This is actually a good thing (no one wants to wake up having accidentally punched a lamp because you thought you were punching something in your dream), but when your mind wakes up before your body is capable of moving again, the result is pretty terrifying.

"I saw the shadow or outline of a man that just stood at the end of my bed. I started freaking out while the shadow just stood there," wrote one Reddit user in a thread discussing sleep paralysis earlier this year. "Suddenly, it moved towards me, I yelled, and then it disappeared."

It's a fascinating thread if you're interested in anecdotes, but the science behind sleep paralysis is just as interesting. Let's take a closer look at some of the symptoms below.

1. You Can’t Move When You Wake Up

It probably goes without saying, but it’s worth noting: Above all, sleep paralysis is characterized by an inability to move or speak as you go to sleep or wake up. However, this doesn’t mean all your muscles are paralyzed; although you can’t perform voluntary movements like sitting up or moving your eyes, involuntary functions like breathing and circulation still function.

That being said, it certainly doesn’t feel that way. Clinical psychologist Michael Breus said in an interview with BuzzFeed that sleep paralysis is often accompanied by a feeling of pressure on your chest, which is why many people come out of it, so to speak, gasping for air.

According to the Alaska Sleep Clinic, sleep paralysis is usually accompanied by a feeling of dread; people tend to wake up convinced that a “shadowy figure” is lurking in the corner of the room. Although this threatening figure often remains obscured, sleep paralysis is sometimes characterized by outright hallucinations, which we’ll discuss below.

Although hallucinations aren’t as common as fiction makes them out to be, research has shown that they’re more common in people with sleep disorders. BuzzFeed writes that “true visua, and auditory hallucinations during sleep paralysis are relatively rare,” but they can happen. However, the aforementioned feeling of dread is more commonly reported in sleep paralysis than clear images or sounds.

4. It Happens On Either Side Of Falling Asleep

According to the Alaska Sleep Institute, there are two kinds of sleep paralysis: Hypnagogic, which occurs as you're falling asleep, and hypnopomic, which occurs as you're waking up. "In most cases of sleep paralysis occurring as one is first falling to sleep, the condition is often associated with the sleep disorder narcolepsy," the Institute writes. For people without other sleep disorders, hypnopomic is more common.

5. You Have A History Of Certain Illnesses

You may come out of an episode of sleep paralysis convinced that you’re losing your grip (or being abducted by aliens), but it’s actually a fairly common phenomenon. Estimations fluctuate wildly depending on the study, but one of the more extensive papers concluded that at least eight percent of people experience sleep paralysis at some point.

However, there are certain factors that increase your risk of experiencing sleep paralysis. The Sleep Paralysis Project writes that it's incredibly common in people with narcolepsy, for instance, and WebMD notes that factors like sleep deprivation, psychiatric disorders, and even just sleeping on your back have all been linked to sleep paralysis.

6. You Can’t Will Yourself Awake

Unfortunately, most researchers agree that it’s difficult to “will” your way out of sleep paralysis. In an interview with CBS News, Christopher French, Ph.D, explained that people who experience it frequently often learn to recognize an episode and calm themselves down that way. “It may be helpful just to reassure yourself that it's a natural experience and that it's really nothing to physically worry about,” he explained.

In short, there’s not a whole lot you can do about sleep paralysis, but Live Science reports that episodes last a few minutes at most. If you’re a horror buff, there’s even a silver lining: Think of it as your own personal psychological thriller.