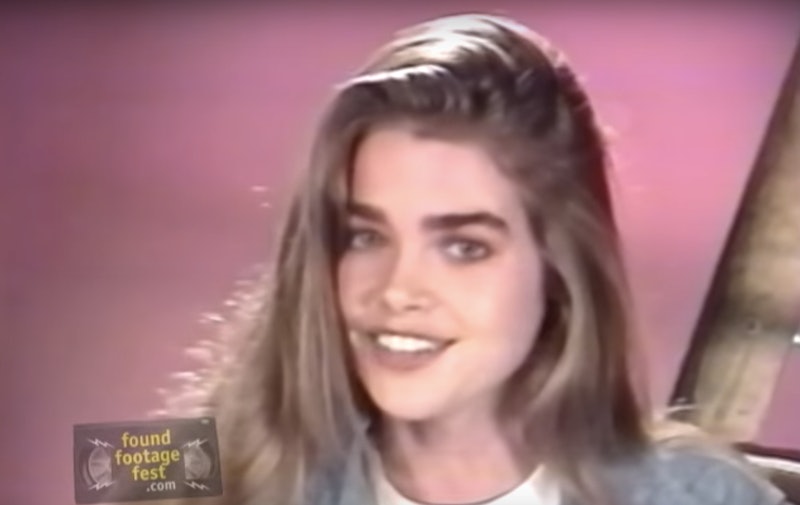 You would think that by virtue of existing in the '90s that we'd all be a little more prepared to look back on the cringe-inducing things that happened during them without much surprise, but this "How To Model" compilation video from the '90s is here to prove you wrong. Recently unearthed by Found Footage Fest, the video includes a whole bunch of clips with tips from models in the '90s, salvaged from VHS tapes in thrift stores. And spoiler alert, you guys: it's the trippiest thing your 2016 eyes will ever see.

It's not just the oh-so-casual cameos from Denise Richards and Mario Lopez (who are, incidentally, stiff enough in the video that I low key wonder if someone was training a weapon on them off-screen). No, friends — it goes so much deeper than that. Apparently in the '90s, approximately 86 percent of modeling had to do with what vowel sound your mouth was making to get the perfect shot. Just as homo erectus evolved into man, these poses would eventually evolve into Tyra Banks' infamous smize — but not before they were preserved in their awkwardness on film for all of eternity.

If you plan on time traveling back to the '90s and want to know if you'll make it as a model, then I suggest paying VERY THOROUGH ATTENTION to the following pieces of advice. This could make or break your lycra-wearing career.

What To Do With Your Mouth

You know, the five primary emotions that you learned in preschool. Don't anybody come near me when I'm E, guys. At least not until I've had my morning coffee.

The 2000s revolution that brought our generation's selfie game from zero to hero.

How To Sell Perfume

This was supposed to be the difference between ~sexy~ and fun (!).

Raise your hand if you ALSO ironically posed with the JB cut-out outside your local department store and posted it on social media back when this came out.

Psst, check out our podcast The Chat Room, where we talk all things internet.

How To Mario Lopez

If not Saved By The Bell, then saved by evolving hair trends.

Now snap your fingers if I am absolutely correct that Tyra Banks should run an entire '90s season of America's Next Top Model, forcing everyone to adhere to these guidelines. I would watch the bejeezus out of that. And most likely, so would Denise Richards.