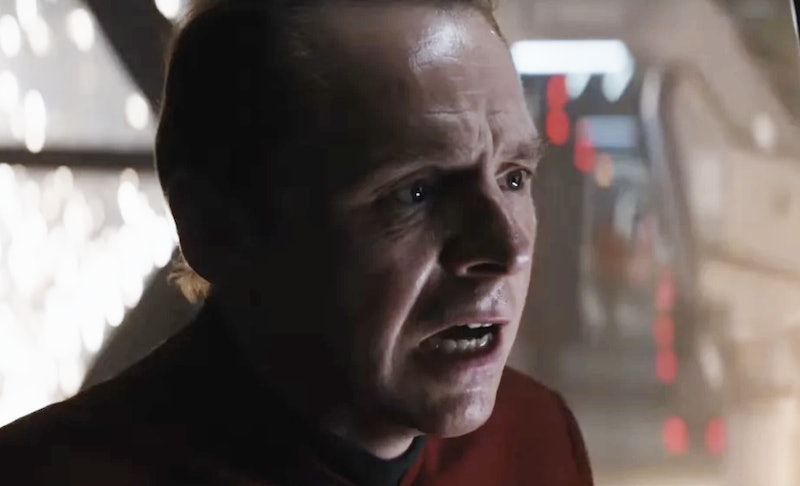 Following the 2015 release of the first official trailer for Star Trek Beyond , fans were taken back by the unusual amount of action scenes for the popular television series turned film franchise. However, in accordance with the third film's highly-anticipated summer release, Paramount Pictures will finally be releasing an all-new look at the Justin Lin-directed continuation on Friday, May 20. And, according to Scotty himself, the upcoming second trailer for Star Trek Beyond is nothing to worry about.

Thursday morning, actor and writer Simon Pegg took to Twitter to not only announce the Friday release of the new Star Trek Beyond trailer, but to also share a behind-the-scenes photo of Scotty's sidekick Keenser with the caption, "Keenser says 'relax!'. One more day until the new Star Trek Beyond trailer finally drops. #GoBeyond CF." That single tweet sends a clear message to previously concerned Star Trek fans: Relax! After all, it was Pegg himself who originally expressed his concerns about the first trailer in saying, "I didn't love it, because I know there's a lot more to the film. There's a lot more story, and a lot more character stuff, and a lot more what I would call 'Star Trek stuff.'" Now, with the help of Pegg's encouraging words, I'm expecting all of the Star Trek feels in the new trailer.

Considering the fact that the franchise's latest director, Justin Lin, got his message of the upcoming film's "bold" new viewpoint out of the way, it could be time that he brings fans back to the roots. He hasn't failed us in the sequel department before, with Simon Pegg and Doug Jung's writing at the forefront, we know we can expect the Star Trek fans first fell in love with. Pegg explained in an interview with Collider, "Being given the keys to the Star Trek universe was an extraordinary privilege. It was extremely important to me that we did it justice. I know Star Trek means a lot to a lot of different people. It means an enormous amount to some people. And at the same time, it should be something that everyone can enjoy as well, so you have to look at the means of writing a screenplay as well."