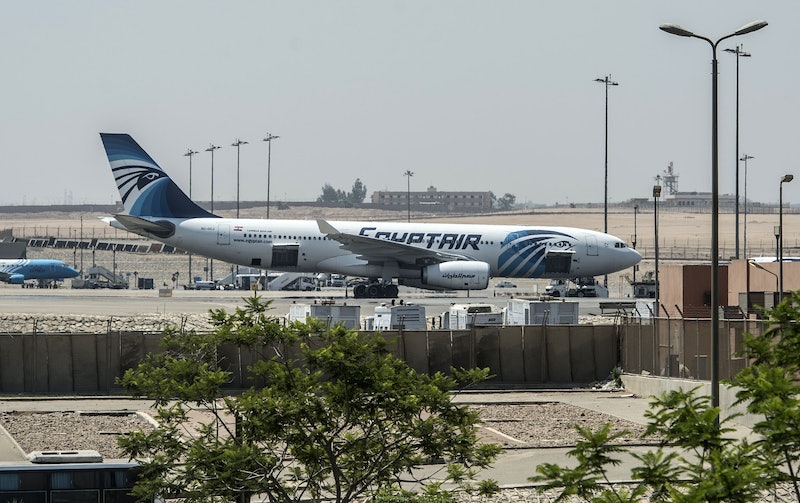 Cairo's flagship airline, EgyptAir, has been the subject of headlines and tributes after its Flight MS804 was downed on its way from Paris to Cairo on Thursday morning. Like other major airlines, this isn't the first time the company has experienced such a crisis: An EgyptAir plane crashed 14 years ago, also during the month of May, during a flight from Cairo to Tunis, allegedly due to bad weather and software problems. Of the 56 people on board, 42 of them survived. EgyptAir has been operating flights for over 80 years. Its fleet of over 75 aircrafts transports passengers to 78 different cities. Update: Egyptian military officials found debris and personal belongings from the EgyptAir flight 804 in the Mediterranean Sea early Friday morning.

In total, EgyptAir planes have crashed five times since March 1972, when a plane crashed in the Shamsan Mountains; all 30 people on board died. In 1976, another plane flying from Cairo to Don Mueang International Airport in Bangkok crashed into a Thai industrial complex, killing all passengers and 19 people who were on the ground.

The deadliest crash occurred in October 1999 when a flight from New York City to Cairo plunged into the Atlantic Ocean 60 miles off of the U.S. coast. That particular flight had 217 people on board — even more than Flight MS804 —and all were killed. Three years after the flight crashed, investigations confirmed the pilot had deliberately crashed the plane as an act of revenge.

Hijack attempts on an EgyptAir plane have been made seven times. Most recently, in March, an Egyptian man hijacked a flight from Alexandria to Cairo and forced an emergency landing in Cyprus. The hijacker's explosive belt turned out to be fake and all of the passengers were released safely after hours of waiting on the tarmac.

According to Paul Hayes, director of safety and insurance at the U.K.-based Ascend Flightglobal Consultancy, Airbus A320, which was the model of Flight MS804, had "an excellent safety record," he told NBC.

If anything, Egypt's tourism industry is in the most danger of being affected, especially after ISIS affiliates planted a bomb in a Russian Metrojet flying from Sharm-el-Sheikh to Russia in October 2015.

French and Egyptian authorities have not yet ruled out the possibility that Flight MS804 was also the result of a terrorist attack. In fact, Egyptian Civil Aviation Minister Sherif Fathi told Egyptian state-owned newspaper Al-Ahram that the possibility of a terrorist attack was "higher than that of a technical error." During an interview in March 2016, Egyptian Prime Minister Sherif Ismail said that the nation's tourist revenues had dropped about $1.2 billion since the Russian Metrojet crash.