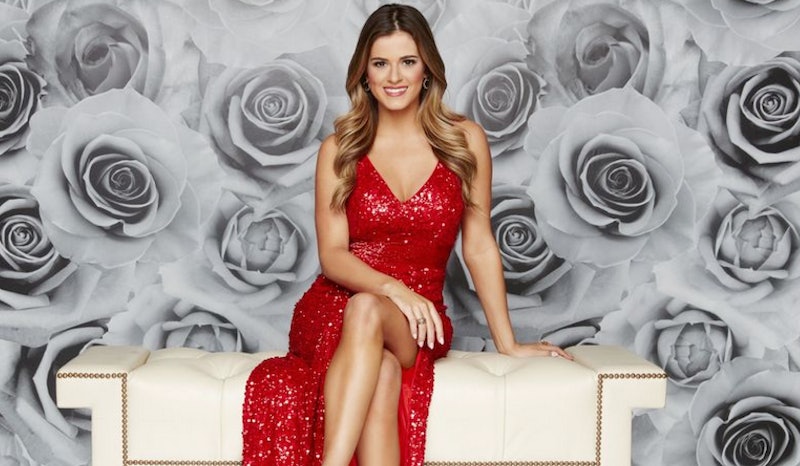 It's hard to believe, but the wait is almost over! Next Monday, JoJo Fletcher's season of The Bachelorette kicks off, and that means we're about to meet 25 new men who have the potential to win her heart (and ours)... or, alternatively, become total douchebags the Bachelor fandom mocks mercilessly until the end of time. And just in case you're avoiding spoilers but you're also antsy to find out who these guys are, a happy medium does exist. On Thursday, Glamour released a video of select Bachelorette guys showing off what's in their suitcases, and I think it reveals a lot about who these dudes really are. And based on this information alone, there's already one guy in the running who will definitely win JoJo over on night one.

As former Bach contestants have revealed, they're responsible for bringing anything and everything they'd want to have with them while filming (including clothes) and it's not like they have unlimited room to bring whatever they want. Packing space is precious, and while one dude (Chad) brought an entire suitcase full of protein powder, another one of the guys made a smarter choice. Contestant Luke brought cowboy boots for himself and a brand new pair as a gift for JoJo, straight from Texas.

So why does this matter? Plenty of guys bring gifts, so why is Luke's the standout? I think it'll be extra special for JoJo because she's from Texas. After spending so many months away from her family and her favorite local spots filming The Bachelor and then, a few months later, The Bachelorette, I'm willing to bet a taste of home is exactly what she needs. Plus, it's the perfect ice breaker during that first cocktail party when the conversations can get so awkward. If they're both from Texas, they probably have other things in common, too. Luke has the right idea!

Sorry, Ali. As much as I loved those floral shirts you brought, I think Luke is the clear winner here, and JoJo will probably agree. If only we could have gotten a peek into what everyone brought. I have a feeling that would have told us everything we know about this season.

Less than a week stands between every Bachelorette fan and JoJo's season premiere. Are you pumped yet? If not, borrow some of Chad's protein powder. He has enough to share with us all.