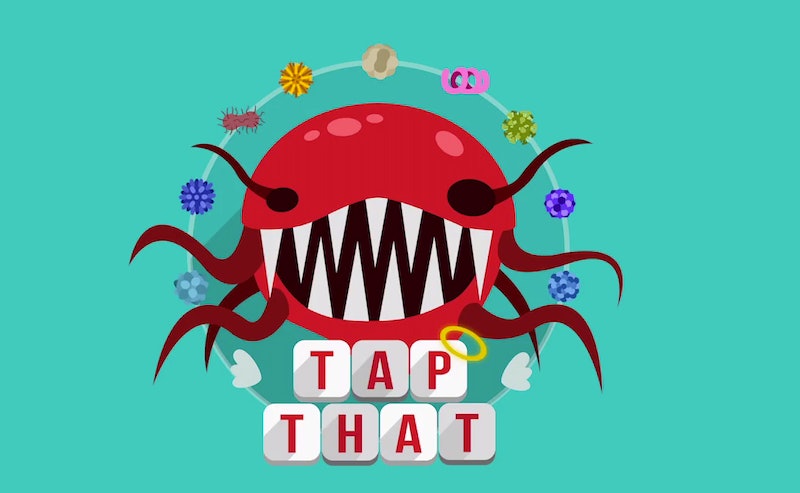 What if sex ed classes weren't about awkwardly putting condoms on bananas in front of your classmates — or worse, weren't entirely absent because politics trumped your education? An upcoming app called Tap That is providing sex ed without the awkwardness and without the red tape. Because this is information that we all really do need to learn at some point, and it may as well be both accessible and fun, right?

Tap That was designed by 25-year-old Peiying Feng, who was born in China but has also lived in Canada and the United States — an experience which has given her a chance to get a sense for how sex ed is handled in three different countries. Finding it lacking in all three, she was then inspired to create an app to help kids learn more about the topic. “I remember two embarrassing sex-ed classes in Canada, and then it was back to China where there was nothing,” Feng, who was 14 when she moved back to China, told The Daily Dot.

And although Feng was in graduate school by the time she lived in the United States — that is, past the point where you'd expect your school to be teaching students sexual health — our national policies towards sex ed are still far from impressive. And thus, an app was born.

Tap That functions as a mobile video game, complete with characters who meet, fall for each other, and get together — and then deal with all the potential consequences, namely STIs. Players are able to diagnose their character with sexually transmitted illnesses and learn about the symptoms and treatment options. And if your player character catches the infection early enough, you can use the condom button to make sure their partner is protected, too. It's designed to move fast and to feel like an actual game, not an educational tool.

In the United States, many students don't get much in the way of education about sexual health. Many more are given an incomplete, judgmental, and in some cases downright inaccurate education, all of which is beyond unfortunate. Sexual health is one of those crucial things that you need to know about as an adult — if you don't, it can certainly mess up your entire life in a hurry. And so the fact that many people never have someone explain things to them when they're growing up is pretty awful.

Fortunately, though, we live in the age of the Internet, where information on sex and sexual health is only a Google search away. Unfortunately, a lot of the information you find online is also inaccurate, and it's hard sometimes to know which sources to trust. But if you have everything in a trusted app, on the other hand... Well, you do the math.

Tap That is still in development and doesn't have a release date yet. But once it gets here, my hunch is that it could be pretty darn useful. You can learn more at the Tap That website here.