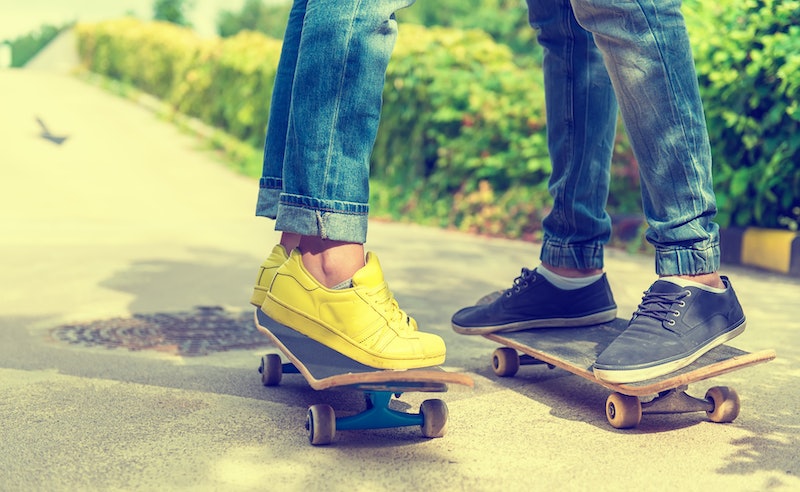 Many teens are getting less sex ed, at least in a formal setting, and many U.S. teens are not getting educated about sex at all, according to “Changes in Adolescents’ Receipt of Sex Education, 2006–2013” by Laura Lindberg, principal research scientist at the Guttmacher Institute, et al. For the study, Dr. Lindberg and her colleagues reviewed data on 15- to 19-year-olds from the 2006-2010 and 2011-2013 rounds of the Center for Disease Control and Prevention’s National Survey for Family Growth.

The teens who said they received a formal education about birth control went down from 70 percent to 60 percent among females, and 61 percent to 55 percent among males. And, in 2011-2013, 43 percent of adolescent females and 57 percent of adolescent males received no info on birth control before they first had sex. No info! It’s better to get the 411 versus nada, right?

Yeah, and how many of you got formal, sit-down “birds and the bees” talks from your parents anyway? In my conservative household growing up, I know I didn’t. All I got was a “Just say ‘no,’” warning every time I left the house, sometimes followed by a quick and awkward, “Don’t have sex until you’re married!”

The study found that one in five young women and one in three young men did not get sex ed instruction about birth control from other formal sources or their parents.

“Relying on parents alone to provide teens with necessary information about sex is inadequate,” said Dr. Lindberg in a press release announcing the study’s findings. “Schools should provide medically accurate and comprehensive sex education, so teens have the information and skills they need to enjoy the best health possible.”

Yes, it would be great for schools to educate teens, in addition to, or in place of, their parents (especially if their parents are like mine and avoid the topic altogether). Getting educated doesn’t mean the teens will necessarily have sex, but at least they’ll be informed if and when it comes up. Honestly, I don’t even remember having sex ed classes at my Catholic high school. Sure, we had health class and books with pictures of male and female anatomy. But what, exactly, that anatomy did was glossed over.

“Repetitive learning through a variety of sources — whether online, through smartphone applications, or in person educational seminars — allow for different educational messaging, as well as allows for teens to access information that they need when they need it,” Dr. Michael Krychman, MD, OBGYN, Sexual Medicine Gynecologist and the executive director of the Southern California Center for Sexual Health and Survivorship Medicine, tells Bustle. “Sometimes, the best education is one that is obtained anonymously to ensure privacy and no embarrassment for the teen.”

Aside from less formal instruction about birth control methods, fewer female teens received formal sex ed on other sex-related topics, too. Sigh. For instance, fewer were given formal instruction on how to say no to sex at all, from 89 percent to 82 percent, and how to say no to sex before first having sex, from 78 percent to 70 percent. The amount of young women getting educated about STDs and HIV/AIDS went down, too, from 94 percent to 90 percent and 89 percent to 86 percent, respectively.

Yet, not all of the study found decreases in sex education. There was an increase in the amount of young women learning about birth control, from 22 percent to 28 percent.

But, the research discovered that teens in rural areas got even less sex ed. Dr. Lindberg found that they use contraceptives at lower rates than urban teens when first having sex, and that there is less access to sexual and reproductive health care services.

“Decreased sexual education is troublesome for our youth as it allows perpetuation of sexual myths and mysteries — our youth are needing facts and information concerning normal sexual functioning and how to properly protect themselves from sexual transmitted diseases and unwanted pregnancy,” Dr. Krychman says. “Frank, open, and honest communication will help empower our young adults to be in better control of their sexual self-esteem and enhance sexual wellness, as well as help build relationship intimacy. Education will help curb unwanted teenage pregnancy, sexual transmitted infections, and, in some cases, depression or severe extreme suicide for gender identity or orientation concerns. Teenage suicide is rampant for bullying and confusion regarding gender or orientation considerations, but that is another topic altogether.”

But, despite all the above facts uncovered in the study, U.S. teen pregnancy rates are at historic lows, thanks in part to better contraceptive use, according to previous Guttmacher research. “Teens are using contraceptives more consistently and more effectively,” said Heather Boonstra, director of public policy at Guttmacher. “They could be doing even better if they were receiving quality sex education from a range of sources. Providing age-appropriate information about sexual and reproductive health to teens is smart and essential. National and state governments should increase funding for and prioritize formal sex education in school curricula, as they reach large numbers of students. Providing and directing teens to evidence-based and accurate online resources is also critical, and may be a way to reach teens who fall through information gaps.”