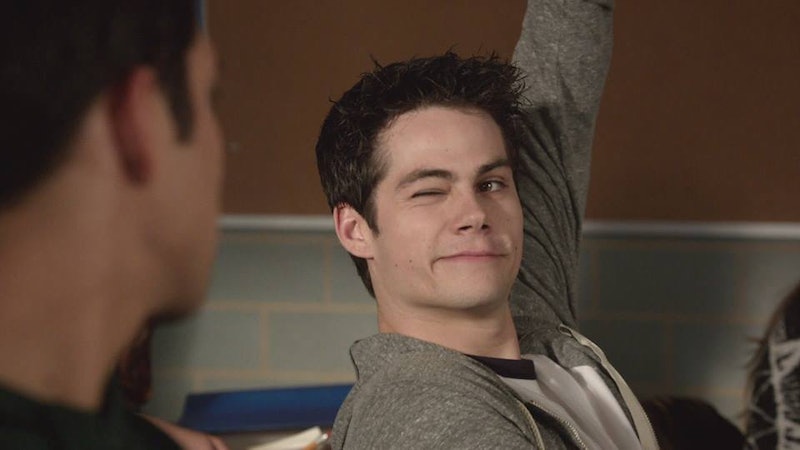 Following news that Arden Cho, who plays Kira, has left Teen Wolf before Season 6, rumors have started circulating on Thursday that another exit is imminent. According to reports, Dylan O'Brien won't be in Teen Wolf Season 6 either. Bustle has reached out to O'Brien's people and to MTV for comment, but have yet to receive a response. O'Brien plays fan favorite Stiles Stilinski on the show, and rumors that he won't be in the new season have understandably upset fans around the world. It looks as though Season 6 marks huge changes for the Teen Wolf cast, and has left fans wondering if Dylan O'Brien is OK. The actor suffered injuries on the set of the third Maze Runner movie in February 2016, and, since then, production has been pushed back on all of his projects.

It seems likely that O'Brien's absence from Teen Wolf Season 6 is to allow him time to recover from the injuries he sustained on the set of Maze Runner: The Death Cure. According to The Hollywood Reporter, "Sources say he was in a harness on top of a moving vehicle when he was pulled off the vehicle unexpectedly and hit by another vehicle." This sounds like a fairly major accident, and has obviously left the actor with a long road of recovery ahead of him. If the rumors are true, and O'Brien won't appear in Season 6 of Teen Wolf, will his part be recast?

So far, there's been no official confirmation of O'Brien leaving the show, or of his character being recast. There have, however, long been rumors that Dylan O'Brien would leave Teen Wolf at some point, and some mysterious tweets from Melissa Ponzio, who plays Scott McCall's mom on the show, hint at big changes. In one tweet, Ponzio fuelled rumors by saying, "new faces, places, emotions, possibilities, confusion, passion, tactics, problem solving, honor, relying on others, loss = #TeenWolfSeason6.” Maybe these changes include O'Brien leaving the MTV show?

Of course, it's near impossible to think of Teen Wolf being the same show without Scott's faithful sidekick Stiles, and so it's unlikely that some sudden trip abroad or move will remove Stiles from Scott's life. Hence why Stiles may, in fact, get recast. Between witches and banshees and kitsune, Teen Wolf has established itself as a place where, really, anything magical could happen. Except, you know, vampires. They can stay in their lane.

Everyone's main concern is that O'Brien recovers from his injuries, and can return to the job he's so good at. Hopefully the actor's absence from Season 6 of Teen Wolf will only be temporary, as a world without Stiles Stilinski is no world at all.