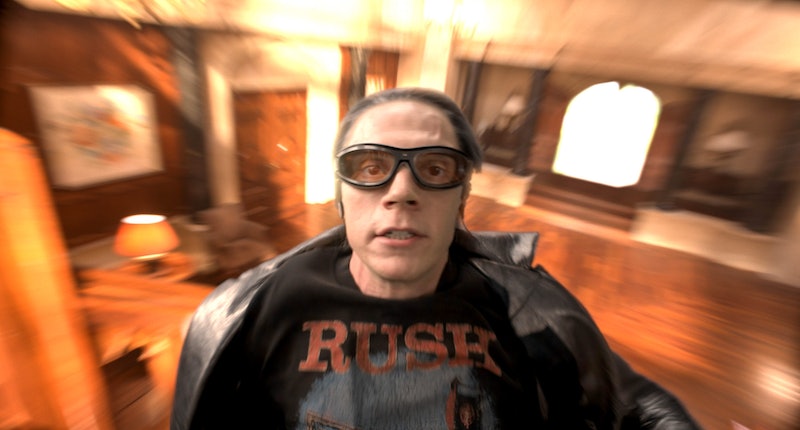 Quicksilver is back. After stealing the spotlight with his show-stopping action sequence in X-Men: Days of Future Past, Quicksilver just had to come back in X-Men: Apocalypse, and he doesn't disappoint. Fans of the X-Men will remember that though Quicksilver did not jump to join the mutants or Charles' school for mutants at the end of Days of Future Past, he does have one very specific reason to come back into the X-Men fold: he thinks that Magneto is his father. The question of his parentage might be what brings him back to the fold, but once he arrives, he's there to give fans what they want: another epic, slow-motion action sequence. Trust me when I say t hat the Quicksilver action scene in X-Men: Apocalypse is even better than the one from Days of Future Past.

Spoilers ahead! The Quicksilver scene in Apocalypse is similar to the one in DOFP — in which everything around Quicksilver slows down, giving viewers a front row seat to what the world looks like for him when he's moving full speed ahead. That same visual gag is used in Apocalypse, only on a much larger scale, and for a bit longer. And, like in Days of Future Past, where Quicksilver's hilarious action sequence was paired to Jim Croce's "Time In A Bottle," his new sequence is also perfectly paired with music.

In Apocalypse, Quicksilver's musical tastes have changed a bit. Like any self-respecting music fanatic of the early '80s, his scene shows him jamming out to "Sweet Dreams (Are Made Of This)" by Eurythmics. Without giving too much away, the scene basically consists of Quicksilver darting around the X-Mansion, dragging students out to safety before a bomb explodes. It's an elaborate sequence that features multiple sets, actors and effects. According to Quicksilver actor Evan Peters, this new sequence took over one month to film, and it was all in service of one goal: to top Days of Future Past. "It's like a sequel," Peters said in an interview with Collider . "You take elements that worked in the past and then you add on to them and try to make them better. It's similar, but different and better."

Not only is Quicksilver's action sequence in Apocalypse better than that of Days of Future Past, his role in the new film is also quite a bit larger. Quicksilver is right in the thick of the action in Apocalypse, and he's not just there to help break anybody out of jail this time. "At this point it is the beginning of him coming into the group and being a force that fights evil. It's pretty sweet," Peters teased to Collider.

Odds are pretty good this won't be the last time Quicksilver blows fans away with an action scene. I already can't wait for the next one.