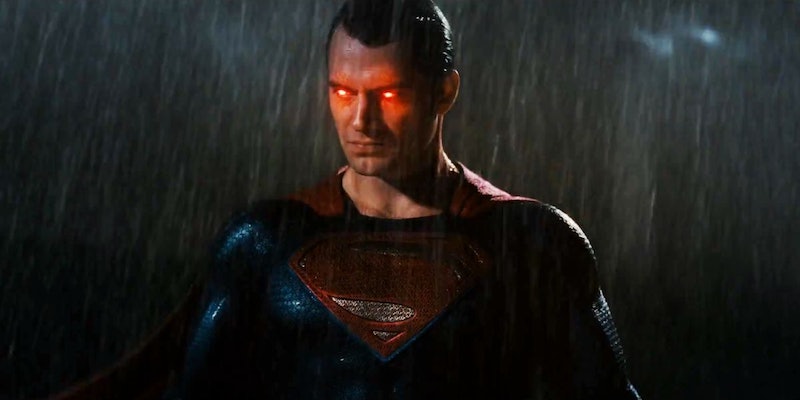 If people are getting sick of superhero movies, they sure aren't showing it. Three of the top five films at the box office this year so far are superhero movies, and smack dab in the middle is Batman v Superman: Dawn of Justice . The movie greatly expands DC Comics' new expanded cinematic universe, adding Batman, Wonder Woman, The Flash and others to the world of Superman established in 2013's Man of Steel. Naturally, many fans would like to revisit the film as soon as possible, so when is Batman v Superman coming to Netflix?

Unfortunately for DC fans, the movie is probably not going to be streaming anytime soon. The film is distributed by Warner Bros., and if you look at Netflix's offerings, you won't find a ton of recent movies from the studio. The new releases to hit Netflix in recent months — Minions, Goosebumps, and Hotel Transylvania 2 — all come from either Sony or Universal, which would indicate that Netflix has some sort of deal in place with those companies. Netflix also has a well-known deal in place with Disney, the other member of the "Big Four" studios, that begins this year wherein the streaming service gets first run rights to all movies released by Disney from 2016 on.

So where will Batman v Superman end up streaming first? The most likely destination is on HBO Now. The premium cable network/online streaming app shares the same parent company as Warner Bros. (Time Warner), and is currently full of Warner's biggest 2015 releases. Mad Max: Fury Road, San Andreas, Magic Mike XXL, Vacation, The Man From U.N.C.L.E., and Pan are all available on HBO, along with just about every other new release coming out of the WB. Therefore it makes sense that Batman v Superman will follow suit and head to HBO Now, probably by the end of 2016. But what if you only have Netflix and want to get your DC fix?

Thankfully, Netflix has a strong relationship with Warner Television. The CW's live action Arrow and The Flash are both available to stream, along with a ton of DC animated series like Justice League, Justice League Unlimited, Young Justice, and The Batman. There are also the animated films Justice League: War, Justice League: The Flashpoint Paradox, and Son of Batman, and even Tim Burton's original live action Batman from 1989.

So even though Batman v Superman doesn't look like it's coming to Netflix anytime in the near future, there is still plenty of DC Comics content for fans to stream until the film (probably) makes its way over to HBO Now.