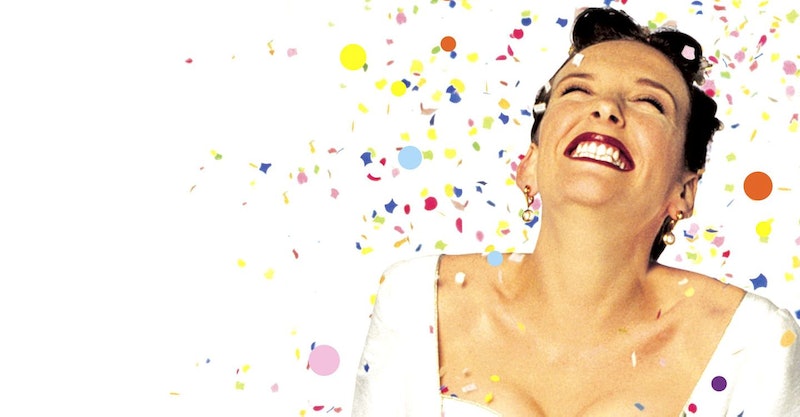 Okay, so the empty bags of potato chips and grungy sweatpants that come along with a solid Netflix marathon might not sound like a recipe for self-improvement, but let me tell you — there are plenty of movies on Netflix that will make you a better person. I'm personally a big believer in film's ability to create change, and while I love a feel-gooder as much as the next person, I generally try to track down movies that either expand my perspective on the world or complicate subjects that folks often write off. At the end of the day, I want to have been fostering my own media literacy — you know, while eating snacks and chilling on the couch.

While I am not entirely sure of what a “better person” looks like, I do know that I feel better when I’m emotionally or intellectually challenged by my entertainment and can leave my living room more engaged with the outside world, whether I’m lacing up my boots to go to a march or just trying to hold my mood together. Since your feelings of self-worth and political motivation are probably dictated by your community, here are 31 movies that could make you a better person.

A perfect equation of sequins, Cyndi Lauper, and dance moves like whoa, this is my go-to movie when the blues set in.

Like Strictly Ballroom, Muriel's Wedding is another gem from 1990s Australia. The sheer amount of ABBA and badass lady friendship makes this film worth watching again and again, but young Toni Collette's blend of charm and sadness keeps it high on my list. Muriel's Wedding might not teach you how to fight the power, but it will make you nicer person, damn it.

Bring your tissues and ripped up ideas about love. Beginners covers all the bases: romantic love, familial love, friend love, and even stranger love. It's an introspective piece that is super gentle in its execution and always calms me down.

Brush up on your feminist history with this one. She's Beautiful When She's Angry address several joys and issues that remain true in contemporary struggles, i.e. this is a case where you could learn something from those that came before you.

This doc will probably make you want to take to the street with a few cans of spray paint — sounds like my kind of self-improvement!

Here's the story of how renegade citizens in 1980s Romania snuck in illegal movies. It involves smuggling and one woman brave enough to translate. Also, Chuck Norris.

If you're a film buff, you're probably aware of how incredibly exploitative the movie industry can be when it comes to depictions of Native Americans. If not, here's the doc for you.

8. Maria Abramovic: The Artist Is Present

If you're trying to reinvigorate your motivation, spend a few hours with Abramovic, the most influential performance artist of the past century. This is what devotion looks like.

I mean, even the trailer for this one is inspiring.

Beautiful shots of food + someone freakishly into their craft + Chicago? I am already revved up to go take on the world.

Save this one for a truly rough day, when you just can't muster the energy to leave the house. Little Voice is as sugary as a slice of pie, but could prove to put you in a better mood.

I had a super snotty professor in college who used to demeaningly call movies that weren't about warfare or based upon Tolstoy "trifles." I freaking love trifles. People Places Things fits that bill, but it allows plenty of real complications to exist while dropping some real knowledge about creating comics (think of that part as the whipped cream).

This is one of the smartest satires of abortion I've ever seen. Loaded with nuance and dark humor, Citizen Ruth retains a ton of humanity and might make you question your ideas about reproductive justice, regardless of your current position on the matter.

A lesbian sex-worker befriends a grifter in this best-name-ever comedy. Again, this is one that could humanize taboo subjects in ways that enrich your perspectives on taboo subjects.

This one complicates many familial narratives that are often oversimplified or ignored. If anything, it shows that older women are worthy subjects of film. More of this, please.

Punk and puberty. Don't you feel like a better person just by watching that trailer?

This documentary digs up romantic relationships between those managing autism, a grossly overlooked and misunderstood condition.

This PBS piece reveals how some heavyhitting women shattered the crud out of some glass ceiling.

I'm of the belief that reading Calvin and Hobbes makes you a better person, and here's a documentary that agrees with me.

Hey, I'm not going to tell you how to dress, but maybe this documentary will inspire you to demand changes to the garment industry.

Women artists often spend their lives in the shadows, so it's hella important to recognize their contributions. Vivian Maier is a killer place to start.

Hey, did you know that gender inequality harms everyone? Cool. Watch this movie.

If you were a kid sometime in the past 30 years, you probably remember the D.A.R.E. program. This film claims that the program helped destroy communities and directly targeted people of color, and you're gonna want to tune in. Also, tattoo the phrase "prison-industrial complex" on your brain if it's not there already.

27. Aileen: The Life And Death Of A Serial Killer

While this movie isn't going to make you feel better about anything and teeters on the edge of sensationalized journalism, it does highlight the systematic pathway to prison and violence that awaits many women.

Rid your brain of the tired images of a passive, dilapidated Detroit. Michigan's politicians might be problematic at times, but its citizens are engaged and making stuff happen.

29. The Kingdom Of Dreams And Madness

This is an older piece, but it's still important.

Again, it's time to humanize issues like sex work. This doc isn't necessarily as critically engaged as the Sex Workers Outreach Project, but it is an important film.

While folks might take issue with your Netflix marathons, it might be worth pointing out all those knowledge bombs out there.