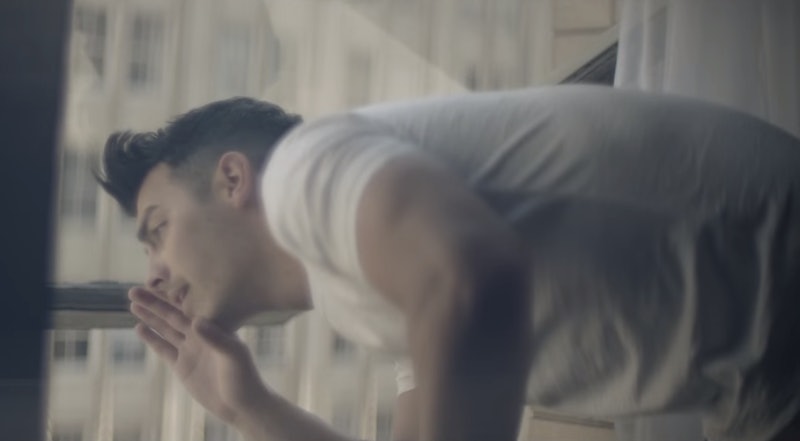 First, DNCE introduced fans to the concept of "Cake By The Ocean," and, now, with their latest single, "Toothbrush," things seem to be getting just a tad bit more serious. The song — released along with their four song EP titled SWAAY — is not only featured in their recently released second official music video, but it also manages to match a catchy beat. DNCE's "Toothbrush" lyrics reach a whole lot deeper then they may appear to at first. Aside from the song itself being ridiculously fun to sing along to, there's also a bit of a hidden message.

While at first this song may sound like it's about nothing more than casual partner, instead it's about asking that person to continue seeing you more often than not. "Toothbrush" is the lead singer, Joe Jonas', sly way of asking a girl to be his girlfriend. Honestly, I wouldn't mind being serenaded by these lyrics, if the guy is too shy to say how he feels. Right off the bat, the song's chorus begins, and you can tell that this guy is ready to go public.

Then, as the song goes on, you may think that he's alluding to a fling. However, it soon becomes clear that he wants it to be something more.

Stuck in a limboHalf hypnotizedEach time I let you stay the night, stay the nightUp in the morningTangled in sheetsWe play the moment on repeatWhen you’re standing there in your underwearAnd my t-shirt from the night beforeWith your messed up hairAnd your feet still bareWould you mind closing the bedroom door?

By telling the girl she can leave her toothbrush at his place a number of different times — which is not something you usually let any person do — these repetitive meetings also seem to become a bit more permanent with the following verse.

Basically, this girl just keeps having him come back for more, and there's no resisting her now. So whoever he's talking to better go buy herself a new toothbrush stat. This is some serious next level relationship talk right here.