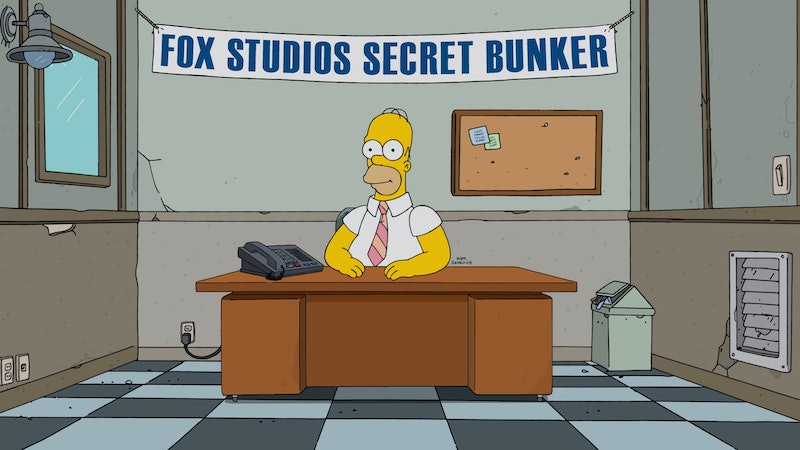 By the end of next fall, a lot will be different. A new class of Olympians will have won medals. We will have elected a new president. A new season of TV will debut, with all new hits and flops. But one thing is constant: We will always have The Simpsons. It's something you can set your watch to. Season 26 of the show ended on May 17, but, like every year The Simpsons will return in the fall; and TV Line reported that it's been renewed through Season 28, which will air in 2016-2017. I bet it'll get renewed again, too, and keep going at least until Season 30.

I know many people complain about the decline in quality of The Simpsons from its best years, but I think the show gets taken for granted. The Simpsons has given the culture so much. I've absorbed so many Simpsons quotes into my vocabulary that sometimes I forget they're even references to the show; they're just so ingrained in my natural speech. And, now I'm not limited to saying these quotes out loud. (Who talks out loud anymore?) Thanks to the Frinkiac meme and GIF generator, I can pretty much tweet any thought in my head as a Simpsons GIF. This is what I'm going to be doing until the show returns in the fall. Here, some of my most-overused quotes.

Certainly handy in an election year.

I am a new mom, and this is no joke. And, no, it doesn't get you off work. But it might explain some weird injuries.

This is Lisa's response to, "You like hanging out, too?" Next time someone asks you if you want to marathon something on Netflix while not getting up off the couch, this is the most appropriate response.

I live in a city and don't often drive a car, so, when I have to take a summer road trip, this is always my first thought.

I think this about myself all the time, except I know I'm not actually that cool or witty.

Truer words have never been spoken on The Simpsons. Here's to Season 27!