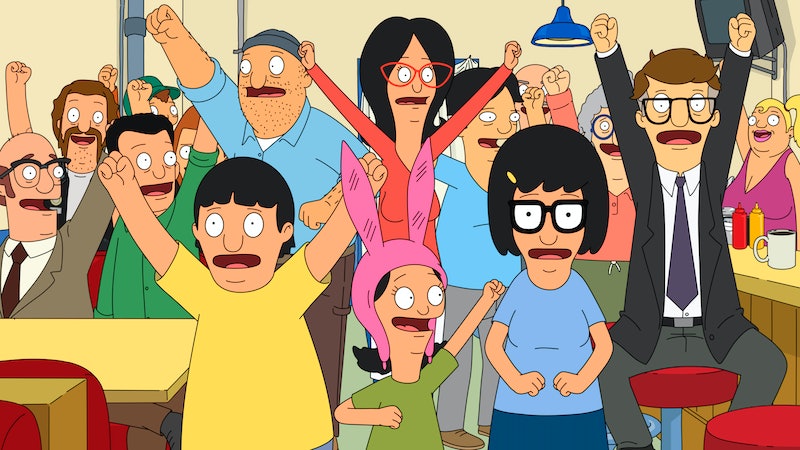 I have good and bad news for Bob's Burgers fans. The bad news is that the Season 6 finale of the FOX animated series airs Sunday, May 22. But the good news is very, very good. Not one but two all-new episodes will air for Sunday night's season finale at 8:30 p.m. ET and 9:30 p.m. ET, respectively. And that's not all. That second season finale episode will also be the series' 100th episode, FOX's TV schedule shows. With all of that excitement, you might not even be thinking about when Bob's Burgers will return for its Season 7 premiere.

Just kidding! Of course you totally are, as am I. What we do know is that FOX has renewed Bob's Burgers for Season 7 and (bonus!) Season 8, the network announced in October 2015, as reported by Variety. While there isn't a specific premiere date for Season 7 of Bob's Burgers just yet, it is slated to return in Fall 2016, as revealed in FOX's primetime schedule released during the Upfronts in New York this week. Right now, Bob's Burgers is scheduled to air at 7:30 p.m. ET on Sundays in the fall when FOX's NFL wrap-up show The OT isn't airing and stay at that time slot during the midseason.

This is all-around very good news. What's even better is the fact that there are a lot of really awesome animated series on traditional TV and streaming services these days, so there's plenty to keep you entertained until Bob's Burgers returns. Here are a few I'd recommend you put in your queue.

The Simpsons will also be airing its season finale on FOX on Sunday (ending Season 27, to be exact), and if you haven't watched this seminal animated series or much of it over the years, then there's no time like the present. After 27 seasons, The Simpsons still finds ways to breathe some new life into its iconic characters, such as including a live segment in its May 15 episode. It's also been rather good at adapting its comedy to what's going on in the world and in pop culture at the time. Believe it or not, there may actually come a day when we don't have new episodes of The Simpsons, but for the foreseeable future, it looks like we can always count on a visit from one of TV's most beloved families.

The Simpsons will always make you laugh, but BoJack Horseman is pretty much guaranteed to make you cry. Yes, this is an animated comedy about talking animals, but since it chronicles the life of a onetime Hollywood hotshot trying to get back to his former glory while battling his demons, it makes sense that there would be a lot of darker issues at play. Go into it with that mindset when you stream its two-going-on-three seasons on Netflix, but be prepared to laugh, too.

Sure, Adventure Time may technically be for kids, but no one, no matter how old you are, will be able to resist feeling pure, unadulterated joy while watching this Cartoon Network series about a boy and his canine best friend doing whatever they can to protect the Land of Ooo. Don't forget to check out the initial short on which the series is based, too. Watching Adventure Time will help you better understand all the references and GIFs you see about this series on the Interwebs, if nothing else.

Superheroes may be all the rage in entertainment these days, but that wasn't so much the case when The Venture Bros. premiered in 2003. This Adult Swim series turns the superhero genre on its head with its absurdist brand of comedy that depicts both the superheroes and supervillains as hilariously incompetent.

Disney XD's Gravity Falls is another series targeted at the youths, but why let that stop you from watching a perfectly great animated series for people of any age? The series follows twin siblings Dipper and Mabel Pines who try to make sense of the mysterious titular town while on summer vacation at their great uncle's (or rather, grunkle's) place. Unfortunately, Gravity Falls creator Alex Hirsch ended the series after two seasons, he announced in a Tumblr post in November 2015, but at least we have 40 episodes that you can buy to watch from places like Amazon Video, iTunes, and Google Play, to cherish forever.

FOX has a new semi-animated series up its sleeve called Son of Zorn. So, according to the network's schedule, it technically debuts in the fall on Sunday nights like Bob's Burgers Season 7, but it just looks so kooky, I had to mention it. The series will follow an animated He-Man-type warrior voiced by Jason Sudeikis who decides to live a normal suburban life to be closer to his son Alangulon, who, along with every other character on the show, is live-action. And hilarity ensues! But seriously, this show looks pretty funny and could put an interesting twist on the way people approach the creation of animated series in the future.

But if none of these tickle your fancy, and the wait for the new season of Bob's Burgers is just too darn long, you can always find reruns of the show to watch. They'll most definitely still delight you the second time around.