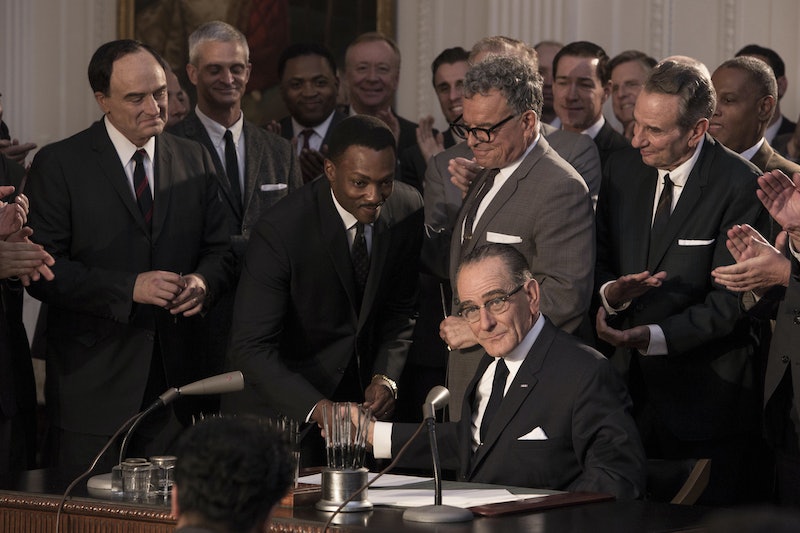 We know HBO has no shortage of amazing TV shows, but the network has recently released several seriously impressive movies, including Bessie and Confirmation. Lyndon B. Johnson and Martin Luther King Jr. will get the spotlight in HBO's new film, All the Way, which focuses on the passage of the Civil Rights Act. According to its official synopsis from HBO, All the Way will give us a behind-the-scenes look at Johnson's struggle to balance his moral compass with the pressures put upon him by the southern Democrats who helped get him elected. Many southern Democrats staunchly opposed civil rights and ostracized black voters, prompting them to form their own party. It will be shown in All the Way, but what was the Mississippi Freedom Democratic Party?

According to Encyclopedia Britannica, the Mississippi Freedom Democratic Party was founded in 1964 in an effort to challenge Mississippi's Democratic Party, which was overwhelmingly white and conservative. Most conservative southern Democrats opposed President Johnson's efforts to address the problems faced by the black community. As a result, they put their support behind Republican presidential candidate Barry Goldwater, who opposed the Civil Rights Movement. In an effort to have their voices heard at the 1964 Democratic National Convention, members of Mississippi's black community formed the MFDP.

Fannie Lou Hamer was selected as the MFDP's delegate at the 1964 Democratic National Convention, according to King Institute Resources at Stanford University. Speaking before the DNC credentials committee, Hamer explained that Mississippi's black community was subjected to violence and intimidation when they attempted to register to vote. She concluded by stating that the Freedom Party deserved to be seated and, if they were denied, it would make her "question America." King supported her statements, adding that the party embodied "the true spirit of Democracy."

Johnson's response was not what the party had hoped for — in an effort to keep the support of white southern voters, he suggested a compromise. As a result, the MFDP was given two "at-large" seats and members of the all-white Democratic delegation were told they could be seated if they gave their promise to support DNC candidates instead of Goldwater. Rather than promise to support all Democratic candidates, the majority of the regular party's delegates withdrew from the convention. Delegates from other states lent their passes to the MFDP, who used them to occupy the empty seats in an act of symbolism and protest.

King, the national committeeman for the MFDP, said the party's presence at the convention was important even though they didn't vote. As reported by NPR, King stated: "We had opened up a whole new world... The issue was no longer will a minority group be accepted, be allowed to vote." Although the party didn't get the results they hoped for at the 1964 DNC, it was a significantly different picture at the 1968 convention. According to African Americans and Political Participation: A Reference Handbook, the MFDP successfully unseated the "regular delegation" that year. At that time, they replaced the regular state party and began a new chapter of racial integration. A black man, Aaron Henry, was elected party chairman and the MFDP dissolved because its members had achieved their goal of making the state's regular Democratic party an inclusive organization.

The MFDP made a huge impact on the Democratic party and All the Way will highlight its importance in the Civil Rights Movement.