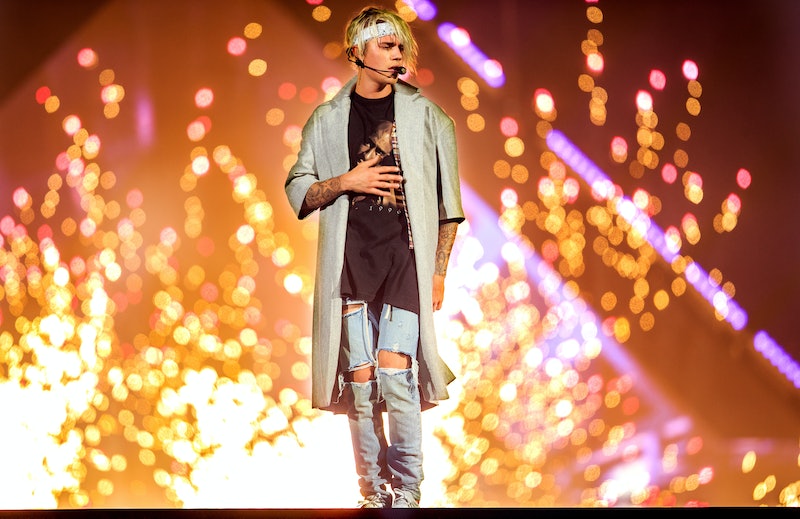 The 2016 Billboard Music Awards are upon us and there's no shortage of amazing live performances lined up, including Madonna, Britney Spears, Rihanna, Ariana Grande, and Nick Jonas. One of the most highly anticipated performers, Justin Bieber, has a big night — he's nominated in 11 categories, including Top Artist. There's always tremendous pressure on the performers at these events and, as we've seen at previous awards shows, Bieber's act contains singing, dancing, and rainy special effects. That's a lot to tackle, so plenty of people are surely wondering if Justin Bieber is lip syncing at the 2016 Billboard Music Awards?

People will definitely be watching closely for any signs that he's not singing live, but it seems like Bieber is totally capable of pulling off his act without lip syncing. In March, he kicked off his Purpose tour in Seattle and received a very favorable review from Rolling Stone. The reviewer made a point to note that the 22-year-old artist definitely didn't lip sync, despite what he overheard one concertgoer say: "Bieber sang for real, played the piano, acoustic guitar and rock drums all gracefully and danced with zero mistakes."

However, other news outlets begged to differ after Bieber's April performance in Kansas City. Time reported that he slipped and fell during his performance of "Sorry" but didn't miss a beat — which some people interpreted as evidence that he was lip syncing. Plus, awards shows are a different ball game and it's possible that he'll lip sync at certain points during the Billboard Music Awards.

Last November, Bieber was tasked with closing out the American Music Awards — and he did so by performing a trio of his most recent hits, complete with a visually impressive rain shower. Heavy.com was one of many outlets to state that Bieber appeared to be lip syncing during "Sorry," his closing song which was accompanied by a serious downpour — but the outlet was quick to point out that it would have been impossible for the audience to hear him over the sound of the falling water if he had attempted to sing live.

If Bieber gives a similar performance at the Billboard Music Awards, he may lip sync at times for the practical reason that Heavy.com pointed out. After all, live singing won't do anyone much good if we can't actually hear him. Either way, Bieber has amazing stage presence and is a top-notch performer — so I can't wait to see him onstage at the Billboard Music Awards. Even he chooses to lip sync, we can certainly still appreciate the fact that he puts on an energetic, impressive show.