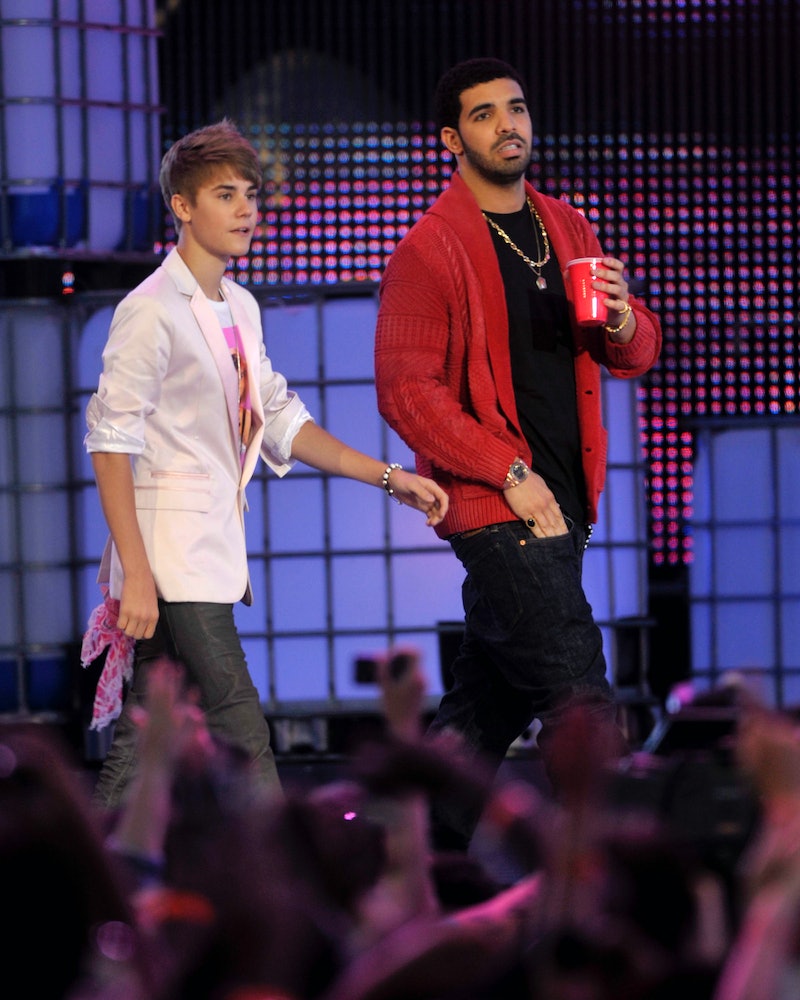 After making fans wait for what felt like forever, Drake released his album Views on Friday, April 29. (Or technically Thursday night, if you're an Apple Music subscriber.) Obviously he had to celebrated the fact that he started from the bottom and now he's here. On Friday night, Drake threw an album release party in Toronto and Justin Bieber attended the event. I can't be the only one who saw the photos and thought, "Wait, Drake and Bieber are friends?!" Apparently so. There's photos of them hugging and it looks like they're BFFs.

Honestly, after giving it some more thought, it would make sense that they're friends. They're both Canadian legends, who grew up in the spotlight. Drake starred as Jimmy Brooks on Degrassi: The Next Generation . Meanwhile, Biebs started on YouTube and went from a goofy teen with a bowlcut to a troublemaker adult (who's slowly but surely beginning to mature). They've become successful musicians in their own right. They manage to produce make hit after hit.

From the looks of it, Bieber is very proud of Drake. He even tweeted, "#ViewsFromTheSix" early Saturday morning. So, what was going through their minds when they hung out? What could they have possibly talked about? Don't worry, I've decided to use my imagination and analyze the bromance between these two.

Here are my best guesses at what Bieber and Drake discussed when hanging out in the photos above.

1. Growing Up In Canada

In the video above, Drizzy says, "Holy sh*t. It just got very Canadian and very real in here." Perhaps they bonded over poutine. They could've talked about How I Met Your Mother and the unfair stereotypes thrown at Robin Scherbatsky.

Selena Gomez. Rihanna. These two constantly spark rumors about their old relationships rekindling. Yet in both cases, these guys are the ones pining over the girls. Previously, Drake even outed himself as a #Jelena shipper. And don't even get me started on the confusing timeline between him and Rihanna.

Four years ago, these two actually sang a song together. I had no idea, but I'd like to thank YouTube for showing me this gem. Maybe they discussed recording future songs together. One can only hope!

Over the weekend, Bieber shaved his dreadlocks and went for a buzzcut. I bet Drake complimented the cut.

When Drizzy's album dropped, so did an app that lets you put a miniature Drake on any photo. Clearly the Biebs was all about it.

Personally, this is a plot from Degrassi that I haven't gotten over. If Bieber grew up watching the show, I bet he's still stuck on it too. He could've gotten the details straight from the source.

Is it too late now to say "Sorry" for my Bieber/Drake obsession? Because actually, I have nothing to apologize for. I'm a big fan of this bromance.