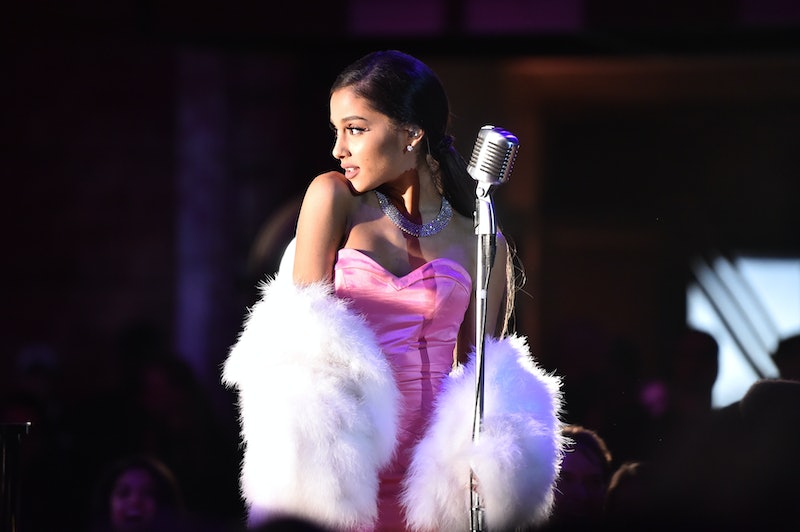 I feel like a proud mama whose little girl is all grown up, because everyone's favorite 22 year old released her third studio album on May 20, and the guest stars on Ariana Grande's Dangerous Woman album show that our girl is making all kinds of friends out there in the great wide music world. I'm fully aware that being just six years older than the talented singer makes my maternal feelings of pride toward her pretty tenuous, but I feel like we've all watched her blossom before our eyes. Sue me if I want to brag about my babygirl's accomplishments at parties and make sure all my friends from bridge are listening to her new music. Because that new music is amazing.

Part of that pride is wanting to be introduced to any and all of my sweet sweet child's new friends. (My understanding is that anyone you feature on your album is your close personal friend, yes? Great, perfect.) So let me put together a tray of snacks and bring it down to the basement where all you kids are hanging out, and let's get the introductions going. I hope everyone likes string cheese and Goldfish crackers. Here are all the artists Ariana Grande featured on her album Dangerous Woman, who help take her music to a whole new level of awesome. Though, to be fair, Grande's vocals do that all on their own.

I know how kids these days love their #TBTs, which is what Grande's collaboration with Macy Gray feels like. Hearing Gray's signature vocals on "Leave Me Lonely" takes me back to 1999, when "I Try" was all over the radio.

Grande goes in a mature direction with Future on the sultry "Everyday," with lyrics like "He giving me that good s**t / that make me not quit, that good s**t". It's the kind of sexually-charged track that, in the past, she might've featured Big Sean on, but ever since their breakup, those days are behind her.

These two have worked together before, of course, on Jessie J's song "Bang Bang," and Nicki Minaj's "Get On Your Knees," so it's nice to see them together again on "Side To Side."

I know what you're thinking! "Um, excuse me, Jaime Foxx was not featured on this album." And technically you're correct. However, Foxx was the male voice on "Focus," which was a Dangerous Woman bonus track in Japan, and was released as a single when this album was still called Moonlight, so he counts.

The identity of the mystery man who can be heard singing the "la la la" intro and outro and midtro on Grande's "Sometimes" has yet to be revealed, but he certainly helps give the song a little extra oomph.

Can't wait to see what all these good buddies write in Ariana Grande's yearbook at the end of the semester. Nice to see her making such good friends out there. Forgive me if I get a little misty.