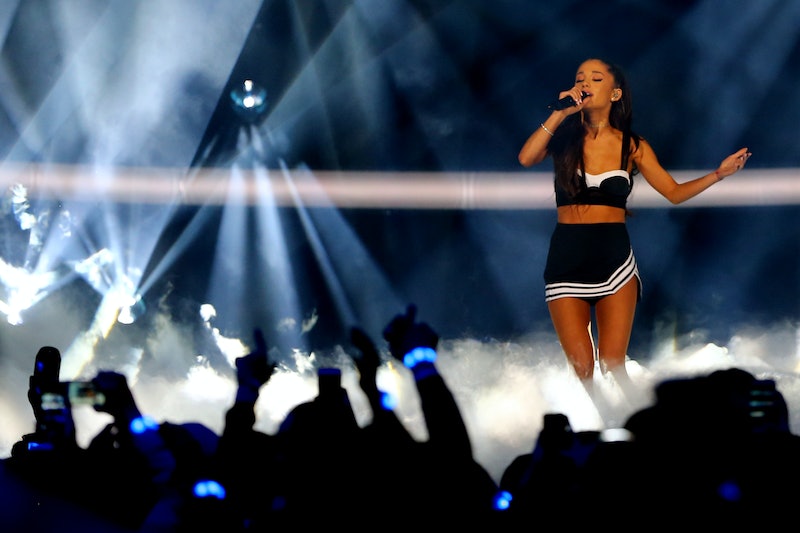 If you somehow haven't listened to Ariana Grande's new album Dangerous Woman at least three times through yet, then what have you been doing with your day? We need to talk priorities. It's packed with one hit after the next, and there's a high probability you're going to be shaking it on the dance floor to these tracks all summer long. The obvious exception to this is the sugar-sweet opening track The Ariana Grande "Moonlight" lyrics which makes for a surprising opening to this saucily titled album: it's as demure and 1950s romantic as the rest of the album is club-tastic.

It's slow and gentle; the only dance floors this track is going to be rocking is high school proms for the slow dance. Teachers over America will be heaving a sigh of relief. This isn't the track you get hot and heavy to with your sweetheart. It's the track you hold hands to. It's basically the spiritual opposite in every way to Christina Aguilera's Dirrty, even despite the raunchy nature of the rest of the album.

Another key aspect of the song is its somewhat... incomprehensible lyrics. Sure, it's almost certainly about Grande's boyfriend and backing dancer Ricky Alvarez, but beyond that, it can be tricky to decipher exactly what's going on considering how breathy Grande's voice gets and how the words sort of blend together. So let's take it slow — just like the song's tempo — and see if we can get to the bottom of it.

The sun is settingAnd you're right here by my sideAnd the movie's playingBut we won't be watching tonightEvery look, every touchMakes me wanna give you my heartI be crushin' on you, babyStay the way you are

OK. I assume from the fact that she can see the sun setting and a movie all at once, as well as the retro themes dominating the rest of the song, that she and her beau are at a drive in movie theater. And, ooh, her emotions are just skyrocketing.

Cause I never knew, I never knewYou could hold moonlight in your hands'Til the night I held youYou are my moonlightMoonlight

Obviously textual analysis is totally subjective and I'm not a lyric scientist or anything, but here's what I think this means. It's impossible to hold moonlight in your hands. Finding true love felt similarly impossible to Miss Grande "til the night I held you." Holding him felt like holding moonlight in her hands because their love is so special and rare. Right?

I kiss his fingertipsAs I'm wishing he's all mineHe's giving me ElvisWith some James Dean in his eyesPuts his lips on my neckMakes me want to give him my bodyI be fallin' for you, babyAnd I just can't stop

So they're in that bittersweet not-quite-together scenario and Ariana Grande's character is getting saucy. Fingertip kissing at the drive in! Can't even. Meanwhile, the dude's all:

With a little sprinkle of:

This part's subtle guys, so bear with me. "Puts his lips on my neck/Makes me want to give him my body." I don't want to be vulgar, so let me put it this way: Grande would like a part of his anatomy to fuse with a part of her anatomy.

Repeat chorus. And then outro:

Grande's met her equal in sass — her beau is bossy. He makes her dance! And cancel her plans! But that's OK, I guess, even though the idea of a guy making me cancel my plans and that being a turn on makes me want to vomit a little, because he's "sweet like candy" but also "such a man." And she's as important to him as he is to her, because guess what her nickname is? Clue: it's in the title.

Do we love this song? I know I do! Now listen to it on loop and enjoy the overwhelming sense of self-satisfaction. You've cracked the secret at the heart of "Moonlight."