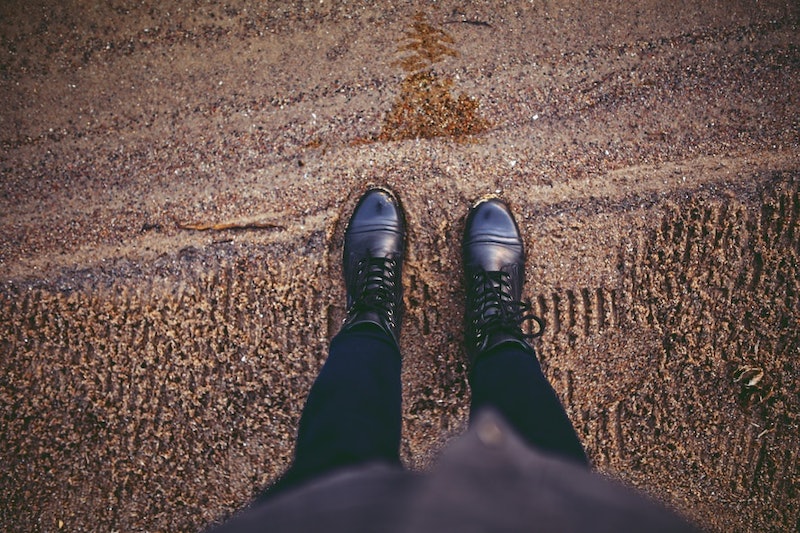 When I’m getting ready for a date, I tend to focus on the outfit and makeup, and don’t think much further than that. My mentality has always been, "Let’s wing it and see what happens,” more or less. Recently I learned of body language mistakes that can drive people away and make you appear less confident, and it made me realize there is a lot more to focus on than how you look for a date. Much of how you come off relies on the body language you use. Some non-verbal cues are great, but as we’ll see in this article, others are quite the opposite.

Have you ever left a date that you thought went really well, but didn’t hear a peep from the guy or girl afterwards, though they told you they’d reach out? Your look was on point, you had great conversation, and you even felt a spark of chemistry, yet you’re left with no new texts or calls from this person days later, and you can’t help but analyze what could have gone wrong. While many factors can come into play re: why this person hasn’t followed up, have you considered that your body language may have been off that night? It’s such a strange thing to consider, but — oddly enough — it could make all the difference in if someone is more or less attracted to you. Let’s uncover the “bad” body language so that we can avoid it in the next go-around. Here are 10 body language mistakes that make you less attractive.

Check Out: What Every BODY Is Saying: An Ex-FBI Agent's Guide to Speed-Reading People , $15, Amazon

OK, so if I flip this for a second and think about how I would feel if my date didn’t stop fidgeting, it would make me feel all sorts of uncomfortable. Likewise, on our end of the table we should try to limit the amount of fidgeting if we want to come across as attractive as could be. Forbes spoke to Amanda Augustine of TopResume who noted fidgeting makes a person come across as nervous. Augustine also cited fidgeting as distracting as well. Calm your nerves instead with a couple of deep breaths, and try to remain the cool, confident person you are.

Since childhood you’ve probably heard people say things like, “Sit up straight.” This direction to avoid slouching is not just about posture — it can also have an effect on how you’re perceived as a person. Want to come off as confident and attractive? Nix the slouching and opt for a power pose — one where your body is open, arms are out, and your head is up. According to a study from researchers at Harvard Business School, this power pose can increase confidence and feelings of power.

3. Taking Up Too Little Space

I’m not sure about you, but when I’m in a situation I feel nervous or uncomfortable in, I tend to close my body off as much as possible, as if to almost hide from those around me. This action of trying to take up as little space as possible can be playing against me (and you, if you do this too) in terms of perceived attractiveness to others. Health spoke to Patti Wood, MA, a body language expert based in Atlanta, who said, “When you take up less space, you appear and feel less powerful, and people may treat you that way.” This is not to say you should sprawl out across the table at dinner (yikes!), but try to keep your body relaxed and open.

4. Closing Off Your Torso

In the same way in which you may be used to keeping your body as compact as possible, it might be possible that you’re also one to close off your torso, perhaps without even realizing it. Research on the topic has shown this behavior — crossing your arms over your chest, holding your purse in front of your body, folding your hands in front of your stomach — can show you’re closed off. If you want to be certain you’re not coming off in this way and increase your sense of openness, avoid blocking your torso in any way.

Think twirling your hair while on a date shows you’re flirting? Well, not so much, according to Janine Driver, the founder, president, and lead instructor of the Body Language Institute in Alexandria, Va., who spoke to US News & World Report about body language. Driver said playing with your hair can be perceived as irritating for the person who you’re interacting with. Why? It another body language cue that signals nervousness. Make it a habit on not reaching for your hair when you’re with the person you’re trying to attract… unless you want to unintentionally bug the heck out of them.

According to charisma coach Cynthia Burnham who spoke to Forbes about body language, eye contact is an important aspect of creating a connection between you and whomever you’re interacting with. Are you one to avoid eye contact? You might be driving the other person away. Burnham suggested holding eye contact a little longer in order to make sure the personal connection is made. The connection via eyes shows you’re interested, too, and helps the mutual attraction begin to flourish.

Here’s an interesting tidbit of information — if you mirror someone’s actions, you’re subconsciously creating a bond between you and the other person, according to Entrepreneur. This mirroring is in the small movements, like lifting a glass when the other person does, or crossing your legs when they do. However, if you’re doing the opposite of what they’re doing you could be throwing off that connection and unknowingly decreasing how attract you appear to them. Don’t feel as though you need to go overboard with the mirroring. Just remember to keep it simple.

8. Keeping Your Palms Down

Palms up and open — a good thing. Palms down and closed — a bad thing. According to Wood in her interview with Health, open palms signal that you’re open to seduction. Preventing your palms from being shut-off, so to say, can make you seem more interested and attractive to the other person. Next time you’re out with someone you’re really feeling, look down at your hands and see what they’re up to, and change it up as necessary.

One more quick thing to mention on the hands topic — the idea of hiding them. Research shows that when we hide our hands (e.g., put them in our pockets, tuck them under our legs, etc.) that we’re signaling to others that they might not be able to trust us, according to CNN, and therefore it decreases how attractive we come off as.

I know this has definitely happened to me before — I’m totally into a guy I’m out with, but the second he even touches me slightly I freeze up. Even without meaning it, I’m signaling to the guy that he should back off, according to Cosmopolitan who cited Bryn Drescher of the Body Language Institute on the topic. If you want to seem open and attractive to this person, keep yourself relaxed. When he or she goes to move a hair behind your ear or another simple, soft gesture, remain relaxed. It will prevent them from backing away.

As you know see, body language can play a big part in how attractive or unattractive you are perceived to be. By avoiding some of the body language mistakes discussed here, you might quickly find you’re feeling a whole lot more confident and attractive in no time.