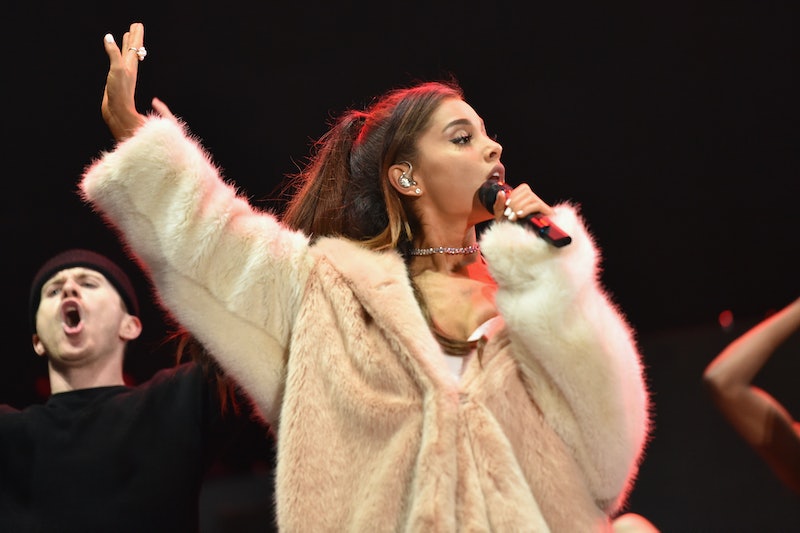 After months of teasing and name changes, Ariana Grande released Dangerous Woman , and you can hear in the lyrics that she’s definitely placing emphasis on the “woman” part. Looking to bury her past life as Cat from Nickelodeon’s Victorious once and for all, Dangerous Woman is filled with sultry lines... for the most part. Somehow, if you listen closely, Grande’s inner tween shines through, because plenty of Dangerous Woman lyrics sound like an eighth grader’s AIM away message.

I’m serious! Take away all the put-on sexiness, and the Nicki Minaj guest spot, and these could pretty much be lines that bled into your away messages during the early 2000s. Of course, Grande at the time was probably like, a literal child herself, but, in an alternate universe, I still think it could work. Seriously, think of all the lyrics you hijacked as your most vulnerable, lovelorn self. They’re basically all of this.

Feeling skeptical? All right, then. I’ve taken a sampling of Grande’s lyrics and put them out of their usual context, just so you can see how they would fit into your middle school woes (and the away message that would inform your classmates about said middle school woes.) Scroll on and see.

Technically you didn't hold Kevin from Algebra I. Technically, he badly grinded against you at the last winter dance. It was a magical night all the same.

2. "Ooh, Let's Be Honest, Baby, This Is So Unusual, Ooh, And I'm Not Tempted, Baby, Even If They're Beautiful"

This is a stab at being deep. Suffice to say, it'll be six years before you discover The Smiths.

3. "Tonight I'm Making Deals With The Devil, And I Know It's Gonna Get Me In Trouble, Just As Long As You Know You Got Me"

You're 13. You have never kissed a boy. You're leaving to visit Nana at the nursing home in five minutes. But you don't want anyone on your buddy list to know that.

4. "Don't Need Permission, Made My Decision To Test My Limits"

"WHAT DO YOU MEAN I HAVE TO DELETE MY MYSPACE, MOM? DO YOU WANT ME TO BE SOME KIND OF UNPOPULAR FREAK?!"

You're just having some really intense feelings about Ryan and Marissa's break-up on last night's episode of The OC.

It goes without saying that this one is painstakingly done in alternating caps and lower case letters.

You're more greedy for tater tots at the school cafeteria, but they always run out before seventh period.

8. "So Baby, Come Light Me Up And Maybe I'll Let You On It, A Little Bit Dangerous, But Baby, That's How I Want It"

You didn't write this one. Steph McKenzie — the girl with a belly button piercing — has this has her away message. You're not sure what it means, but the winky face at the end is practically pornographic.

Bethany asked if you wanted to come to the mall with her, but you just wanted to camp out on the family computer and see if Kevin would get online. You think the waiting paid off, because, when he finally did, and you said "'sup," he totally followed up with "nm, u?"

10. "Baby, You're No Good For Me, Darling, 'Cause If You're Gonna Love Me And Leave Me Hanging Here, Then I'd Rather You Leave Me Lonely"

You became bf/gf with Kevin last night and he still hasn't responded to your last five text messages. What's going on?

11. "Now I Laugh About The Things That Used To Be Important To Me"

Kevin dumped you for Steph McKenzie last night, and this is cryptic enough to show that you're over him even though you spent all last night crying to "Silver And Cold." Welcome to your emo phase, kid!

See? Ariana Grande gets past-you. She just gets it.