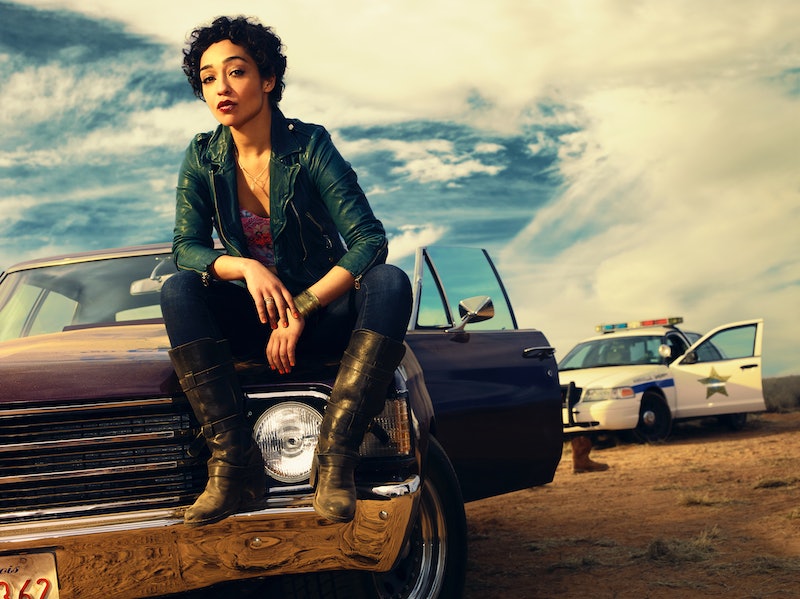 AMC's latest comic book adaptation Preacher may focus on the brooding, titular Jesse Custer, but the supporting characters are going to stand out in totally different ways. Who is Tulip on Preacher ? She's played by Ruth Negga, who you may know from Misfits, World War Z, and Agents of S.H.I.E.L.D. Based on the comics and what we've seen of the AMC series so far, when Preacher premieres on Sunday you're going to be obsessed with Tulip.

In the graphic novel, Tulip O'Hare's mother died giving birth to her. She was "supposed" to be a boy named John William Grady O'Hare, but her father named his daughter after a flower, which his wife would have liked. She sometimes goes by "Little Petal" as a nickname.

Her father taught her how to fight and she taught him about gender roles. You know how sometimes men don't see sexism in the world until they have a daughter of their own? It's not my favorite trope in the world (fictional and IRL), but it seems to have worked out in this situation. That is, until Tulip's dad died in a hunting accident and left her an orphan. Without giving away too much, the comics also suggest that she might have an evil aunt — so trust me, we're in for a wild ride.

Tulip is also super smart, self-sufficient, and looks out for her friends. That often means that her nearest and dearest become partners in crime and that she might have made a few enemies. Tulip is also Jesse Custer's ex-girlfriend — but don't be surprised if a love triangle springs up when sparky fly between her and Cassidy as well.

In an interview with CBR News, Negga said she wants "the portrayal of women on screen and television to allow me to feel like it's okay to be the anti-hero. It's not determined by sex, or it shouldn't be, but we've been sort of trained to think that, that this is road for women, and this is the road for men. I think that's boring, and I think it's just wrong."

Negga also notes that Tulip has a "twisted moral viewpoint," which I think is going to be so fun on screen. So basically, Tulip is way more than than a gun-toting sidekick. This is even more the case in the AMC series. She may be wounded, but that doesn't define her. It's a layer, and that only makes this adaptation stronger.