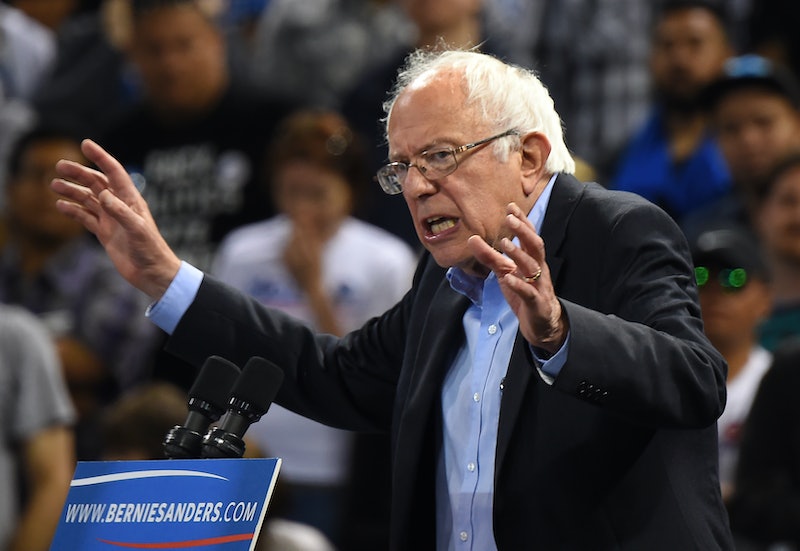 Well, Bernie, it might be time for you to ask for more of those $27 donations. As we zoom ever-closer to the California primary — one that he has pledged to win — it seems that Bernie Sanders is running out of money. Although Sanders has broken records for small-donation fundraising, it doesn't seem to be enough according to new numbers released by the Federal Election Commission. But will his shallow coffers be enough to push Sanders out of the race before California?

In the latest FEC filing, Sanders was shown to have raised $26.9 million in April but spent $38.6 million. That leaves him with $5.8 million left in his campaign war chest. Meanwhile, his Democratic opponent Hillary Clinton raised $25 million in April and spent $23.9 million. That left her going into the next month with $30 million to play with, nearly five times the amount that Sanders has.

As the New York Post points out, Sanders has a tendency to spend and spend big. In 2016, Sanders has averaged more than $40 million in spending each month. That means he's going to need a lot of $27 donations to take on California, a delegate-rich state that comes with a hefty price tag. As the Los Angeles Times notes:

In no state is money more crucial for a candidate than in California. Its sheer size, in both geography and population, makes running here a ridiculously expensive endeavor. Its media markets are some of the most costly in the world, and candidates who try to sidestep big ad buys typically fail to convey their message to key segments of the electorate.

So a cash crunch is the last thing that the Sanders campaign needs going into the Golden State primary on June 7. But will a shortage of cash flow be enough to force him out of the race? Campaign funding (or a lack thereof) has been the nail in the coffin for other presidential candidates. Former Texas governor Rick Perry's second presidential bid ended after he had to stop paying campaign staffers amid a fundraising shortage.

Still, it seems that Sanders is bent on staying in the race despite what looks like insurmountable odds. He's been outspending Clinton on advertising in 2016, which hasn't really given him (or the millions of $27 donors) a great return on investment. He's been able to pull off small states like West Virginia, but that willingness to blow through money means that he has little left for big races like California. So for Sanders to survive California he'll either need to severely cut back his spending — which will hurt his chances of reaching voters — or count on a surge of last-minute donations. Otherwise, the only Bern that California will be feeling is from the sun.