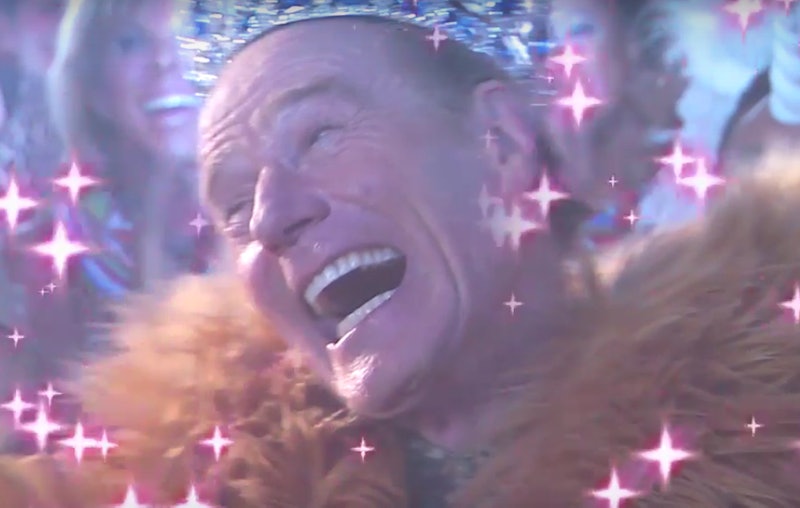 Stop what you're doing, because this is the best thing you'll probably see all day (possibly even, ever? I'm pretty confident about that being the case). In the only possible TV segment to please the bewildering crossover of people who are massive fans of both My Super Sweet 16 and Breaking Bad (oh, you too? Small world!), in celebration of his recent 60th birthday Bryan Cranston filmed a My Super Sweet 16 parody for Jimmy Kimmel Live and it's something else. Featuring a host of special guests including Aaron Paul, Bob Odenkirk, and, mysteriously, '00s pop sensation Sisqo, the segment is so tonally perfect that it actually feels like a real episode of the show. Either show!

Titled My Super Sweet 60, the segment sees Cranston (who is hilariously shown as still living at home with his parents in the comedy short) enjoying the highs and lows of the average spoilt teenager who ever had a starring role on the hit birthday party reality show. There's tears, tantrums, and tiaras (well, five crowns worn at once, to be exact), and Cranston refuses to have anything less than what his heart desires, no matter what the cost. What really works about the clip is that it absolutely nails all of the main elements and tropes that made My Super Sweet 16 the magnificant hot mess of a reality show that it was.

You can watch My Super Sweet 60 below (and for the love of Walter White, do not watch this if you're out in a public place right now because you will start cackling loudly), and in tribute to both the Jimmy Kimmel Live! segment and the original My Super Sweet 16 series, here's the main 14 elements which happened in most episodes which made it the supernova of a show that it truly is:

So glitter. Much pink. Instant hypnosis.

We'd be barely two minutes into the episode before the birthday boy or girl would be crying, screaming, stomping, or complaining about the fact that it's their birthday and they'll do what they want, dammit.

3. The Constant Belligerence Against Parents

In My Super Sweet 16, the more angry a teenager was towards their parents, the more money they got given. This never happened in my home.

Like, Jeff or Jenna can just totally come over and help me pick out outfits and eat all the stuff we have in the cupboards and shout at the maid whilst looking as unimpressed as possible right, Mom?

I don't know if I felt bad for the party planners tasked with organizing these unachievable birthday parties or whether I felt more mystified about how anybody could make a full-on career by throwing sweet 16's for teenagers.

7. Completely Blowing The Budget (Every Time)

How much money do we have to spend? OK, well we need about four times more than that. Just make it happen, Dad.

Because one does not simply walk in through the front door at one's Super Sweet 16 party.

10. When The Party Was Nothing How They Wanted It To Be

The entire night is ruined!

Because there was always someone at the party who most definitely wasn't invited but still turned up anyway. Those were some of the best showdowns in television history, right there.

12. The Reveal Of The Big Birthday Gift

It was a big, expensive car. Every. Time.

The best episodes were the ones where the birthday boy or girls parents got it so wrong on the celebrity guest and just hired whoever they could afford rather than the big, massive musical star who was demanding a cool, couple of million for 10 minutes worth of attendance. Tantrum central.

But even after all the tears and fighting and cruel words against Mom and Dad, one thing always prevailed: the happiness of being a 16-year-old party star who was still the centre of everyone's attention.

I'm just gonna put this out there into the entertainment cosmos: Please, please, please make My Super Sweet 60 a real thing that I can watch on the regular. I'm so ready for it, and I'm pretty sure the rest of the universe is with on that one too, right? Totally.