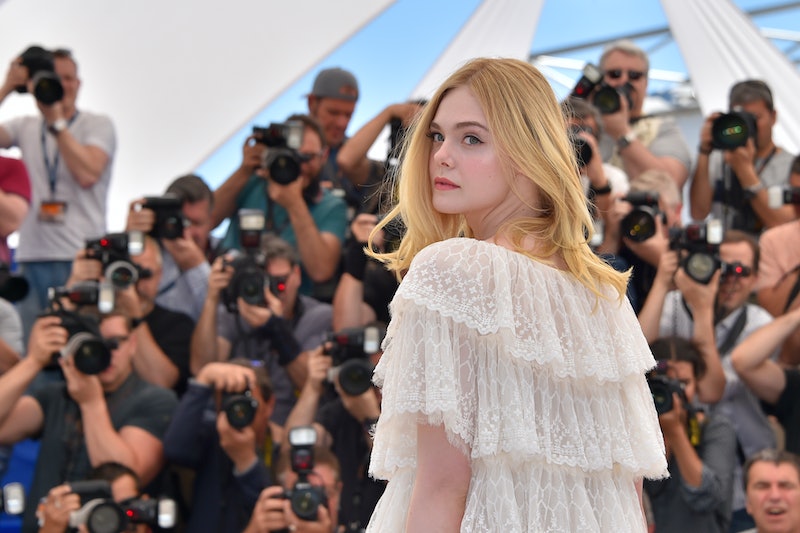 People skip prom for plenty of reasons, but this is perhaps the most glamorous excuse I've ever heard. According to Us Magazine Elle Fanning skipped her senior prom for Cannes and the amfAR Gala, which is a pretty legit reason if you ask me. She might not have been at the school event, but she definitely brought the prom inspiration with her all week long.

Prom might be a pretty big milestone, but then again so is celebrating the release of your movie at the Cannes Film Festival. Plus you get to bump shoulders with tons of celebrities. Bottom line, you really can't blame the girl for skipping out on the dance. If given the opportunity to wear just one pretty dress or a whole handful, I would choose the same route as Fanning.

She doesn't regret it one bit either. She told Us Magazine, "Cannes is basically my prom, which isn't so bad. My movie [The Neon Demon] premiere is on prom night, so that's my prom."

Fanning never officially said that prom was her inspiration for dressing the way she did at these glamorous events, but I think plenty of teens would love to rock outfits like these at the dance. From short, layered dresses to full-on ball gowns, the actress' outfits for the week were definitely prom goals.

1. Floor-Length At The amfAR Gala

If I could go back to my senior prom, I'd want to wear this exact dress. Fanning spun down the amfAR carpet in a Valentino gown with a gold harness.

Fanning looked absolutely gorgeous in this Chanel mini dress. The lace adds feminine touch, but the black accents keep it a tad bit edgy as well.

Her makeup was kept soft and feminine.

Then there was her hair, which she wore natural and a little wavy at the ends.

3. Couture At The Cannes Movie Premiere

Can you imagine Fanning strutting into prom wearing this Zuhair Murad Couture gown? She looks like she just stepped out of a fairytale, and I love it.

And that train! So fabulous.

She kept her makeup soft and sweet again, which I'm guessing is exactly what she would've done at prom as well.

The actress completed her look with a simple, slicked back bun.

Just imagine how stunning she would've looked at prom!

More like this
Here Are All 703 Outfits Rachel Wore On Friends
By Kat George
Sydney Sweeney Just Revived The Iconic ‘90s Cone Bra Trend
By El Hunt
The Best Heels For Bunions, According To A Podiatrist
By Margeaux Baulch Klein and Maria Cassano
Dua Lipa On YSL Beauty, Plus Her Fearless Approach To Hair & Makeup
By Erin Stovall
Get Even More From Bustle — Sign Up For The Newsletter