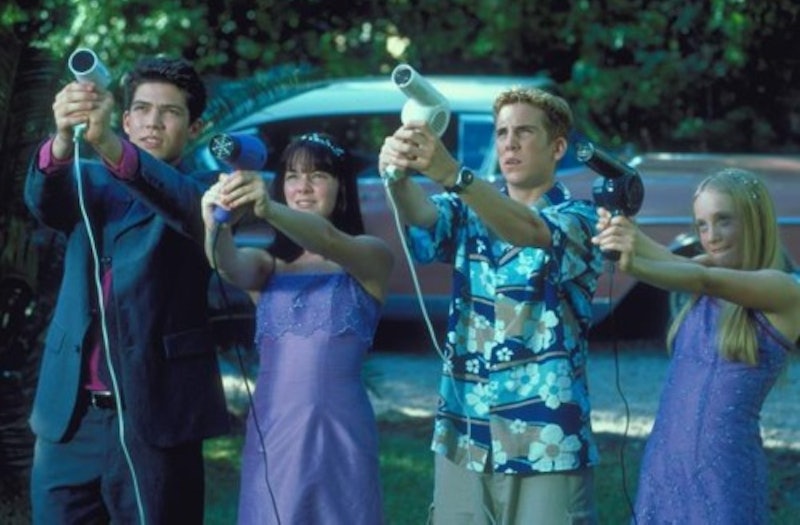 When it comes to everyone's favorite Disney Channel original movies, it's hard to choose just one to be your favorite or even the best. What it is totally not hard to do it choose which ones are the most believable. Don't get me wrong: nobody does the fantastic, the weird, the swoon-worthy or the super cool like Disney. But you've gotta admit it: some of the plots they've hit viewers with over the years are downright unbelievable. I'm sure you're rolling your eyes right now because I've just stated the obvious. Stay with me here: even as a kid, didn't you think some original films were just too much to get into? Or was that just me being an incredibly skeptical child? I'm not saying I wanted all of the fantasy sucked out of the films I was watching watching but c'mon... reanimated corpses? Vampires? Masked villains terrorizing movie-goers? Not really real life stuff.

Mummies coming back to life? Hard pass on the believability factor, bro.

I mean, a guy turns into a merman. That stuff doesn't happen IRL. Although, you gotta give big kudos to Cody for breaking big gender stereotypes.

If Halloweentown actually existed, I'm pretty sure most of us millennials would live there. Until then, it's best to just dream about it.

Leprechauns hold a special place in our culture, but not even Ryan Merriman could sell this as a legit plot.

We definitely do not know what lies in the outer reaches of space, so it's a little plausible that intelligent life from another planet could visit us. Stepsister may have been a fun way to ponder what would have happened but it doesn't make it any more believable.

Twins that are witches? Loved the concept, embraced the dream but I couldn't do the work to make it a reality. The fantasy is too much to handle!

Oh, I'm sorry. Did you really think we could generate people from a computer program?

This will continue to be the only vision of the near future worth investing in making come true. Hop on it, NASA.

Once again, aspirational karate movies make for amazing viewing. Brenda Song makes a kickass Disney channel heroine but the chances of being attacked by a horde of ne'er-do-wells while protecting the world seems a bit too unreal.

Listen, like all good millennials, I love Andrew Lawrence as much as the next one. But cloning as functional reality? Puh-leeze.

11. Phantom Of The Megaplex

The Disney-fied mashup of Scooby-Doo and Scream was amazing, thanks to dreamy Taylor Handley. Fingers crossed, though, that being terrorized at your part-time job is strictly for fiction.

Alright, Disney Channel, you're moving into the realm of believability with The Cheetah Girls, although landing a record deal before you exit high school is only a reality for a select few. *Sigh*.

You cannot deny the Grease-level vibes of magic and music that come with HSM are infectious. The Romeo and Juliet romance between Troy and Gabriella? Divine! But I'm pretty sure most high schoolers would rather go home sick with influenza that break out into song on the reg.

8. Stuck In The Suburbs

I will never forget that Taran Killam, for a brief, beautiful moment in time, made the Disney Channel an extra-perfect place. I'm still waiting for that early '00s pop EP, Killam!

Sibling woes (no matter how many you have) will always be incredibly relatable.

Bring on the skateboarding drama, bro! We were all on board (pun intended) for the SoCal shadiness when it came to Brink!.

What did we do to get so blessed with a film that featured all three of the Lawrence brothers? And with adorable horses? Good. Bye.

Military camp never looked so fun. Be real: you'd only go if you knew Hilary Duff was going to be waiting to welcome you.

Watching Andi become the coolest tomboy ever to grace the Disney channel was equal parts empowering and amazing. Just...yes. All the yes.

If you have ever had a summer job, a job involving manual labor or know someone who is attached to their phone 24/7, then yes, you can attest that Cow Belles is painfully believable.

1. The Color Of Friendship

The perfect historical drama complete with amazing '70s clothing and continuously-timely social commentary made this one of the best Disney Channel films.

Believable or not, I think we can all agree that literally every Disney Channel movie ever made is perfection. I say we plan a nationwide marathon of these perfect little nuggets ASAP!

More like this
The 'Hocus Pocus' Sequel Finally Has A Release Date & It Makes Total Sense
By Shannon Barbour and Radhika Menon
Alicia Silverstone Has Recreated An Iconic 'Clueless' Scene
By Frances Stewart
You’ve Been Singing “Teenage Dirtbag” Wrong This Whole Time
By Bustle UK
Kimberly J. Brown & Daniel Kountz Looked Back On Their ‘Halloweentown’ Romance
By Stephanie Topacio Long
Get Even More From Bustle — Sign Up For The Newsletter