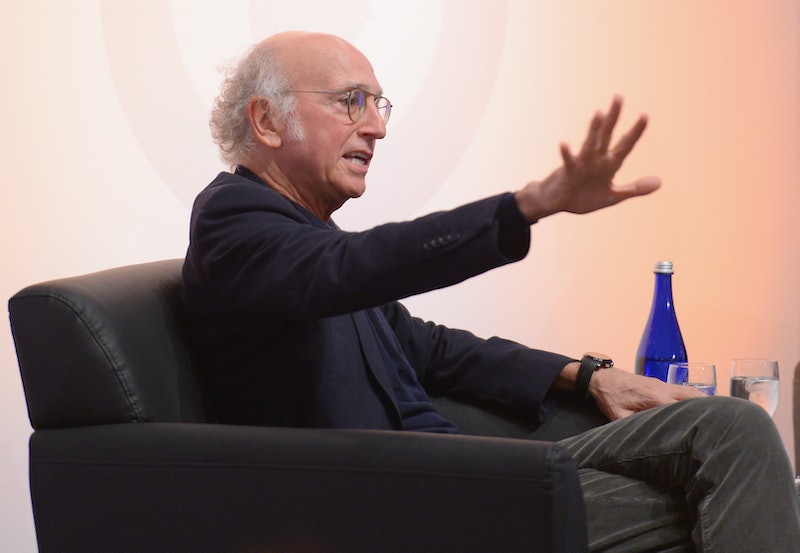 Just as the race between former Secretary of State Hillary Clinton and Vermont Sen. Bernie Sanders seems all but decided, the on-screen relationship between their Saturday Night Live counterparts came to a close on Saturday. SNL's season finale opened with Larry David and Kate McKinnon, playing Sanders and Clinton, respectively, as the Democratic duo sat together at a bar, reminiscing over the election. In real life, it may not be officially over for Sanders yet, but the show made it pretty clear that it was high time for him to say goodbye.

In fact, the finale sketch started as a play on Sanders' real-life refusal to leave the race. As Clinton prepares to leave the bar after celebrating her almost-nomination, Sanders sits in a back corner declaring, "I'm not going anywhere. I can stay here as long as I want." Clinton then greets the senator, saying, "It's always so just fine to see ya."

Sitting together, the fictional Sanders and Clinton swapped memories about the past several months. There was the time that Sanders told everyone to stop talking about Clinton's emails — "I'm so stupid," Sanders declared — and the time that Sanders won the Wyoming vote but didn't win more delegates than Clinton — "It's so rigged," they both exclaimed.

Finally, Clinton and Sanders share a dance — but only because Clinton agreed to give Sanders three superdelegates. They dance from their set, out into the audience, past Bill Clinton, and into a hallway, where Clinton pushes Sanders into an elevator just as the doors close. "Well, that was fun while it lasted," Clinton said.

The whole scene was set in a fitting place: Los Angeles. The California primary will take place on June 7, and it's likely Sanders' last real shot to make it to the general election. If recent polling is any indication, though, he'll have a hard time picking up most of California's 475 pledged delegates. Even if he managed to win all of California's pledged delegates, he'd still lag behind Clinton, meaning he'd need to win over several superdelegates to really maintain his campaign's viability. In other words, Sanders is all but mathematically out of the race, even though he remains very much ideologically invested.

SNL won't return with new episodes until the fall, at which point Sanders will most likely be finishing out his term as a senator from Vermont. One can only hope that he still finds a way to play a relevant role in the election, though — if only for the comedic relief brought by his SNL counterpart. Either way, Saturday's finale was a fitting close to the highly political season.