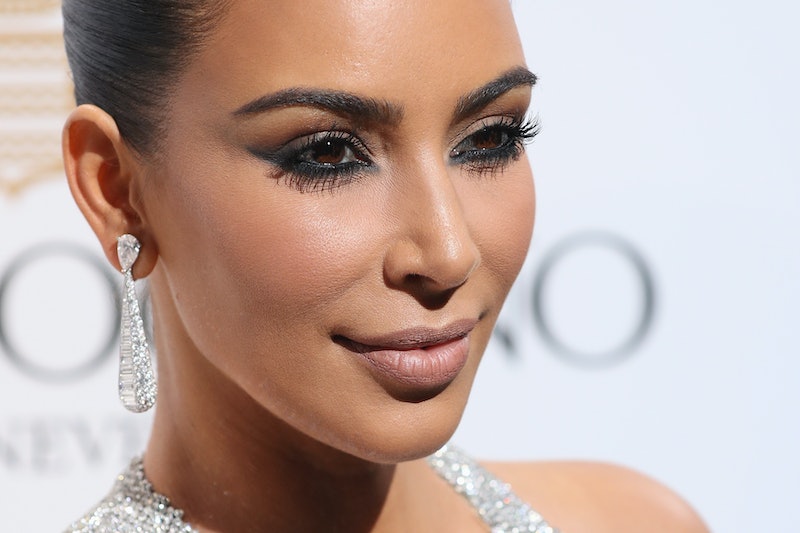 For many years, Kim K has been the queen of contouring. But has her reign come to an end? According to Jezebel, Kim Kardashian won't contour anymore — at least not as much. At a recent Vogue Festival "in conversation" panel with Charlotte Tilbury and Vogue's Fiona Golfar, Kardashian-West took the stage with to discuss her newest favorite beauty trend: "nontouring." It would seem that after ages of promoting contouring as part of her beauty icon brand, the reality star and businesswoman might be calling it quits.

Speaking at the event, Kim K shocked the crowd with her newfound distaste for the contouring craze. "I think right now it’s more about nontouring, like real skin with less make-up on it," she said, as reported by Vogue. "I’m trying to wear less... and my husband loves me without makeup."

Explaining that nontouring doesn't necessarily mean sporting no makeup at all, West added that it's the strobing trend she's most interested in these days. "Now when I travel I just bring a small make-up case, and I’m content with that. I’m really into strobing now, so just highlighting the skin without using bronzer. I love contouring and I don’t think I’d stop contouring my nose — I know people think I’ve had a nose job but it really is just make-up!"

Kardashian distancing herself from heavy contour application shouldn't come as a surprise to anyone who follows the star's every move on Snapchat, where she appears without makeup on the regular.

Stepping away from heavy cosmetics isn't much of a scandal for the Kardashian sisters as a whole, either, considering youngest sibling Kylie Jenner spoke out against wearing heavy makeup in 2015 as well. "I feel like I’m way too young to wear such heavy makeup all the time," she said, US Weekly reported.

In the recent talk with Vogue, Kim K also gave us an insight into her aforementioned minimal travel makeup kit. Considering the 35-year-old's penchant for beauty, the travel kit likely includes way less product than you may have expected from a Kardashian sister.

According to Vogue, this travel makeup kit includes "an eyelash curler, a mini Charlotte Tilbury lipstick in the perfect nude that she created for me, mascara — Charlotte’s Legendary Lashes is my favorite — my Joe Blasco foundation, a little MAC kabuki brush, a gold eye pencil by Kardashian Beauty, a small pot of powder, blush, and my Smashbox bronzer.”

Personally, I love that Kim K isn't going against contouring altogether, but creating a whole new name for wearing less makeup. "Nontouring" has such a ring to it, don't you think? And if it means I can spend all my money on 20 different highlighters rather than one contour palette, then I'm all for it.

More like this
Kim K, Oprah, & Jennifer Lopez Celebrated 25 Years Of Anastasia Beverly Hills
By Olivia Rose Rushing
Kylie Jenner Rocked A Very Kim Kardashian-Esque Outfit At Couture Week
By Allie Fasanella
42 Black Owned Fashion & Beauty Brands To Support Today & Always
By Mekita Rivas, Shea Simmons, Kui Mwai and Dominique Norman
Selena Gomez Posted A No-Makeup Selfie & We Stan A Relatable Queen
By Olivia Rose Rushing
Get Even More From Bustle — Sign Up For The Newsletter
From hair trends to relationship advice, our daily newsletter has everything you need to sound like a person who’s on TikTok, even if you aren’t.