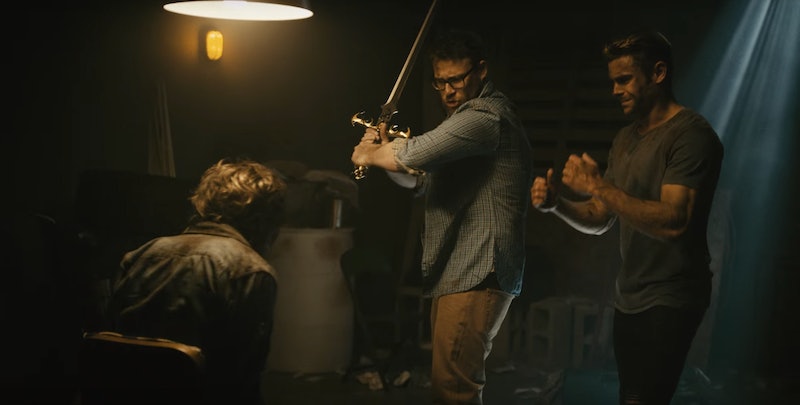 Although there isn't yet a confirmed Neighbors 3, that doesn't mean franchise stars Seth Rogen and Zac Efron can't imagine how they'd like it to go down. According to a new video featuring the actors, if Neighbors 3 does happen, it could have a zombified twist. The video, released by Universal on May 20, shows Rogen and Efron, in a promotion for both Neighbors 2 and Fear the Walking Dead, facing their greatest challenge yet — the undead.

Yes, really. In the clip, Efron and Rogen team up against a zombie they've captured, and the two stars debate whether or not to kill the creature currently tied to a chair. One would think that the answer to this would be a pretty simple yes, but it's a bit more complicated than that; as the tars learn, even though their foe is a zombie, he's still a brother in Delta Psi Beta, according to his shirt. And Efron's character can't kill a brother.

Sadly, the video reveals that this isn't the plotline for an actual Neighbors 3, but only what Efron and Rogen imagine would make a great third move in the Neighbors franchise. "And we call it: Neighbors 3: Zombies Rising," Efron pitches to someone at the clip's end. Personally, I'm disappointed it's just a jokey promotion; how wonderful would it be if fans actually got to watch these actors battle zombies together for a few hours? That, my friends, would be some pretty solid cinema.

Though the video is only two minutes long, it still manages to be jam=packed with hilarity. One of the greatest moments is when viewers learn that Rogen has never killed anything before — well, kind of. Says the actor, "Except my hamster when I was a kid. I sat on him by accident. I don't count that." It's the kind of silly dialogue that makes the Neighbors franchise so fun, and has fans hoping that Neighbors 3 — zombies or not — becomes a reality. For now, though, we will all just have to settle for a healthy hybrid of Fear The Walking Dead (back in August) and Neighbors 2: Sorority Rising, which opened in theaters May 20.